London police hunting for terrorists are deliberately stopping non-Muslims during searches to avoid accusations that they overwhelmingly target Muslims.

Gee, imagine that, stopping Muslims when hunting for terrorists. Who’d have thunk it? 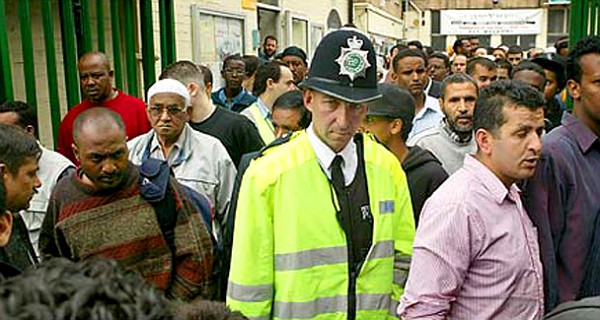 Alex Carlile, who reviews anti-terrorism policies for the government, said there was evidence police are singling out

people from other groups to balance statistics and counter accusations that disproportionate numbers of people of South Asian descent or appearance are searched.

Britain’s Muslim communities have long complained that innocent Muslims are far more likely to be targeted in searches than those from other backgrounds. Carlile said police are now stopping people who bear no resemblance to known terrorists or don’t match any terrorist profiles.

‘I believe it is totally wrong for any person to be stopped in order to produce a racial balance. There is ample anecdotal evidence this is happening,’ he wrote in his

Carlile said the fact the most serious current threat comes from Islamic extremists means ‘an ethnic imbalance may have to be regarded as a proportional consequence of operational policing.’

Britain’s Terrorism Act allows police to stop pedestrians who they suspect could be a terrorist, demand information about them and search their

clothing and belongings. In about half of all searches under the powers, officers can also pull over cars to search the people inside or the vehicles. Government figures show about 41 million people in Britain are Christian, and about 1.6 million are Muslim.

Carlile’s report also raises concerns that Britain is particularly vulnerable to attacks by small aircraft. He said Britain needs better defenses against the risk of small airplanes being flown into buildings or crowded public places. (But don’t check out

the Muslim pilots, that would be raaaaacist!)

‘Some knowledgeable police officers and officials have ongoing concerns about the relative simplicity of terrorism conducted in this way, given the very large number of private aircraft and small airfields.’ he said. —AP  DAWN

PC Police roughing up the white guys in London.