Hey Rachel, haven’t you ever heard about what Muslims do to homosexuals like you? Please, go to the Middle East and find out for yourself.

Neither Maddow nor her guest know jack about Islam. But what else can you expect from Obama’s house media slaves at MSNBC? 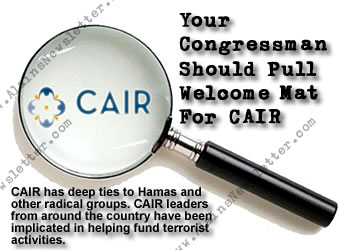 Let there be no doubt that the Council on American-Islamic Relations is a terrorist supporting front organization that is partially funded by terrorists, and that CAIR wishes nothing more than the
implementation of Sharia Law in America.

CAIR has proven links to, and was founded by, Islamic Terrorists. CAIR actively supports terrorists and terrorist-supporting groups and nations.

CAIR is an organization founded by Hamas supporters which seeks to overthrow Constitutional government in the United States and replace it with an Islamist theocracy using our own Constitution as protection.

CAIR was started by Hamas members and is supported by terrorist supporting individuals, groups and countries. *U.S. Senator Richard Durbin: “[CAIR is] unusual in its extreme rhetoric and its associations with groups that are suspect”

*U.S. Senator Barbara Boxer:  “To praise [CAIR] because they haven’t been indicted
is like somebody saying, ‘I’m not a crook'”

Sen. Boxer discussing her decision to rescind award given to CAIR Official

*U.S. Rep. Bill Shuster: “Time and again [CAIR] has shown itself to be nothing more
than an apologist for groups bent on the destruction of Israel and Islamic domination over the West,”

Since its founding in 1994, the Council on American-Islamic Relations and its employees have combined, conspired, and agreed with third parties, including, but not limited to, the Islamic Association for Palestine (“IAP”), the Holy Land Foundation for Relief and Development (“HLF”), the Global Relief Foundation (“GRF”), and foreign nationals hostile to the interests of the United States, to provide material support to known terrorist organizations, to advance the Hamas agenda, and to propagate radical Islam. The Council on American-Islamic Relations, and certain of its officers, directors, and employees, have acted in support of, and in furtherance of, this conspiracy.
(From “Response” To CAIR)

Senior CAIR employee Randall Todd Royer, a/k/a “Ismail” Royer, pled guilty and was sentenced to twenty years in prison for participating in a network of militant jihadists centered in Northern Virginia.  He admitted to aiding and abetting three persons who sought training in a terrorist camp in Pakistan for the purpose of waging jihad against American troops in Afghanistan.  Royer’s illegal actions occurred while he was employed with CAIR

CAIR’s Director of Community Relations, Bassem Khafagi , was arrested by the United States due to his ties with a terror-financing front group.  Khafagi pled guilty to charges of visa and bank fraud, and agreed to be deported to Egypt. Khafagi’s illegal actions occurred while he was employed by CAIR.

On December 18, 2002, Ghassan Elashi, founding board member of CAIR-Texas, a founder of the Holy Land Foundation,and a brother-in-law of Musa Abu Marzook , was arrested by the United States and charged with, among other things, making false statements on export declarations, dealing in the property of a designated terrorist organization, conspiracy and money laundering.  Ghassan Elashi committed his crimes while working at CAIR, and was found Guilty.

CAIR Board Member Imam Siraj Wahaj, an un-indicted co-conspirator in the first World Trade Center bombing, has called for replacing the American government with an Islamic caliphate, and warned that America will crumble unless it accepts Islam.

Rabih Haddad served as a CAIR Fundraiser. Haddad was co-founder of the Global Relief Foundation (“GRF”).  GRF was designated by the US Treasury Department for financing the Al Qaida and other terrorist organizations and its assets were frozen by the US Government on December 14, 2001.