190 Terror Convictions of Islamist Terrorists in Civilian Trials, Mr. President? How About Fewer Than a dozen? A new study should finally put to rest the nonsense claim by President Obama, Attorney General Holder, and others in the administration that “hundreds” of terrorists akin to Khalid Sheikh Mohammad were convicted in the civilian justice system during the Bush administration. The number thrown around by the administration has varied widely from 300 to 190 to assorted spots in between. The point of quoting these figures was to make Americans think that trials of people accused of the most serious terrorism offenses, on par with the 9/11 attacks and those the other Guantanamo detainees are accused of committing, have been routine in civilian courts. So what’s the big deal?

We’ve said that this bloated number is not an apples-to-apples comparison, because it sweeps in large numbers of defendants whose crimes — such as supporting terrorism through financial or immigration fraud — are not even remotely comparable to those of the terrorists who are held at Guantanamo Bay (like KSM), or of the underwear bomber, who was caught trying to bomb an airplane as an act of war on behalf of al-Qaeda.

Well, according to PolitiFact.com, based on an analysis by New York University’s Center on Law and Security, the real apples-to-apples number of major Islamist terrorists who have been convicted in civilian courts is . . . less than a dozen, over seven years. Evidently it’s not so routine after all. National Review

“The Bush administration used the criminal justice system to convict more than 300 individuals on terrorism-related charges,” writes Attorney General Eric Holder in a new letter to Republican critics in Congress. There’s one serious factual debate going on about Holder’s letter, and that concerns those “300 individuals.” Just who are they?

It turns out some lawmakers have been trying for months to get an answer. But so far they haven’t been able to find out.

The letter is part of the Obama administration’s aggressive defense of its decision to grant full American constitutional rights to al Qaeda soldier Umar Farouk Abdulmutallab, the accused Christmas Day bomber. That defense boils down to one sentence: Bush did it, too.

It started back in May 2009, when President Obama gave his famous National Archives speech outlining the plan to close the Guantanamo Bay terrorist detention center. “Bear in mind the following fact,” Obama said. “Nobody has ever escaped from one of our federal’supermax’ prisons, which hold hundreds of convicted terrorists.” Although the president did not put a number on it, various figures, ranging up to 300, have been tossed around in the months since.

To Republican Sen. Jon Kyl, something didn’t sound right. Are there really that many convicted terrorists in U.S. prisons? And are they really comparable with the inmates at Guantanamo? “It’s a disingenuous argument,” says Kyl. “There haven’t been 300 high-profile, dangerous terrorism cases in the United States — if there were, we would have heard about them.” 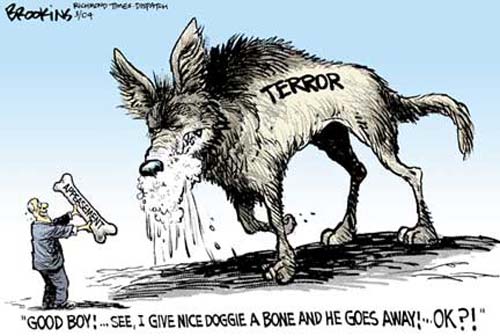 A few days after the president’s speech, Kyl sent a letter to Holder asking for the names and crimes of the terrorists held in federal prisons. “It is not my understanding that there are ‘hundreds’ of federal inmates who have been convicted of a level of terrorism comparable to that of Guantanamo detainees,” Kyl wrote.

The senator got no response. Then, on June 17, Holder appeared at a hearing of the Senate Judiciary Committee, of which Kyl is a senior member. Kyl asked again. Holder didn’t have the information at hand, so Kyl sent another written request.

Weeks passed, and then months, with no response. Then, last October, Kyl got an answer, of sorts, from Assistant Attorney General Ronald Weich. Citing federal regulations, Weich said he “cannot provide … a list of Bureau of Prisons inmates,” although he said the department could give Kyl “briefings about terrorism suspects housed in federal prisons generally.”

As for whether the inmates’ crimes are comparable with those of high-value prisoners at Guantanamo, Weich responded, “A number of individuals with a history of, or nexus to, international or domestic terrorism are currently being held in federal prisons, each of whom was tried and convicted in a [civilian] court. The attorney general considers all crimes of terrorism to be serious.”

Weich’s words raised all sorts of red flags. “History of, or nexus to” — what did that mean, precisely? “International or domestic terrorism” — what about that? Just who was the Justice Department including in the 300 figure?

On Nov. 18, Holder appeared again before the Judiciary Committee. Asked yet again, he was perfectly agreeable. “I will supply you with those 300 names and what they were convicted of,” Holder said. “I’ll be glad to do that.”

Now, two and a half more months have passed, with no answer. And in Holder’s new letter, he repeats the “300 individuals” claim. WASHINGTON EXAMINER