How many times is Denmark going to bow down and kiss the feet of Muslims who want to crush its democracy and replace it with Shari’a Law? How many times are they going to abandon the principles of free speech so as not to offend Muslim scum?

When you stood up to the Muslim seage in your country, the world was behind you, the world bought more of your products. But like England and France, you have sold your very souls to the evil, vile, slugs of humanity – Muslims. I’ll never buy another Danish product again and encourage my readers to do the same.

A Danish newspaper has today apologised to Muslims for the offence caused by its decision to reprint controversial cartoon depicting the Prophet Muhammad wearing a bomb-shaped turban. The Politiken daily said its apology was part of a settlement with a Saudi lawyer representing eight Muslim groups in the Middle East and Australia. The decision has sparked widespread condemnation from the Danish media and political parties.

The editor of Jyllands-Posten, the newspaper which originally printed the cartoons and is a sister publication to Politiken, called it a ‘sad day’ for the Danish press. Joern Mikkelsen said: ‘Politiken’s pathetic prostrating before a Saudi lawyer takes the first prize in stupidity.’

Kurt Westergaard, one of the cartoonists whose home was the target of an attempted attack earlier this year, said: ‘In Denmark we play by a set of rules, which we don’t deviate from, and that’s freedom of speech.’ ‘Politiken is afraid of terror. That’s unfortunate and I fully understand that,’ he told the newspaper Berlingske Tidende.

Pia Kjærsgaard, leader of the Danish People’s party, said: ‘It is deeply, deeply embarrassing that (Politiken’s editor) Tøger Seidenfaden has sold out of Denmark’s and the west’s freedom of speech. ‘I cannot distance myself enough from this total sellout to this doctrine.’ Eleven Danish newspapers were contacted by lawyer Faisal Yamani last year, who demanded that the cartoons were removed from their websites, that the newspapers print an apology and they agree not to use them again.

Mr Seidenfaden initially refused the request, saying it was the paper’s duty to print the cartoon in its coverage of the alleged murder plot to Mr Westergaard. Mr Yamani said: ‘This is a good settlement. It would be wrong to speak of a victory. 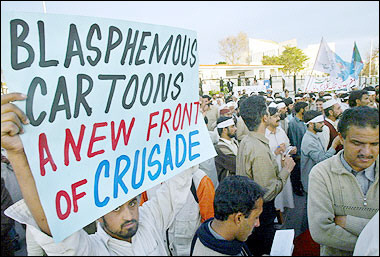 ‘Both parties have reached the point where they understand the background to what has happened. ‘Politiken is courageous in apologising, even though its was not their intention to offend anyone.’ (No, they are weenies for apologizing) Violent protests erupted after the cartoons were reprinted in other countries including France, Germany, Spain and Italy. Danish goods including Lego and Bang & Olufsen were boycotted in the Middle East and the Danish embassy in Damascus was burned down in 2006. (Time for the rest of the world to boycott now) UK DAILY MAIL