The MUSLIM father of a third-grader at Louisville’s Coal Creek Elementary wants the school district to punish the school’s principal for interrupting a presentation he was giving to his son’s class about the Islamic religion.

Seyitriza Tigrek distributed fliers after school this week to Coal Creek parents asking for feedback on the principal and the Boulder Valley School District’s response “regarding his mistakes.” Tigrek’s complaints stem from a September incident when he asked his son’s teacher if he could make a presentation about Islam to the class. His third-grader, Muhammed, is Muslim and was feeling uncomfortable about fasting during Ramadan because his classmates didn’t understand his religion, according to Tigrek.

“The goal of the presentation was just to help the students understand that there was no need to treat Muhammed differently because of his fasting and his name,” Tigrek’s attorney, Philip Bienvenu, wrote in a letter to Superintendent Chris King and school board members.

Tigrek said he started his presentation by talking about how people in the Arab culture name their children after religious figures — like Abraham and Mary. At that point, he said, Kiemele walked into the classroom, overheard the discussion, interrupted and “ordered Mr. Tigrek to leave.” “Mr. Tigrek knows there is anti-Islamic bias present in some of American society since the 9/11 bombings,” Bienvenu wrote. “Mr. Kiemele’s attitude is exactly the kind of xenophobia that should not be part of the education of American children.”

According to the school district’s lawyer, Kiemele walked into the classroom during the presentation and asked to speak to Tigrek and the teacher in the hall after hearing a reference to Abraham. Kiemele said he wanted to review the presentation before it was delivered to the class, but Tigrek “seemed to want to argue,” so Kiemele asked him to make an appointment to have the content of the presentation reviewed. Because Kiemele knew nothing of the presentation and has a “constitutional obligation to ensure that the school district does not endorse any particular religion,” Mequi said, he felt it best to stop the discussion.

“Mr. Kiemele’s approach to the situation is entirely consistent with what the school district expects of a school principal,” Mequi wrote in a letter to Tigrek’s attorney. “A school principal has an obligation to all the students and parents to uphold ‘the separation of church and state.'”

She went on to write that the district is “very concerned by the inflammatory rhetoric and, frankly, defamatory remarks contained not only in your letter, but apparently being uttered by Mr. Tigrek to other Coal Creek Elementary parents.” 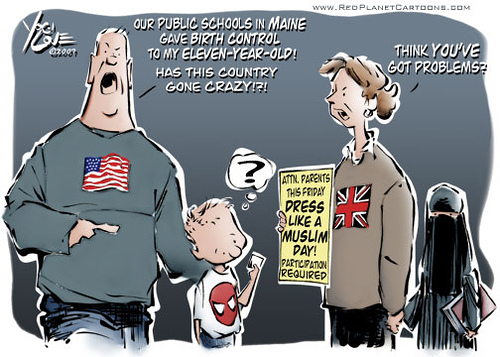 Tigrek told the Camera he has no interest in sitting down and talking with a man who will not admit his error.

He said Kiemele has yet to explain what he heard that “presented some danger to students or was in some way objectionable.”

Because Tigrek feels the district is ignoring his concerns, he said he’s decided to take action — asking parents and teachers whether they’ve had similar problems and distributing fliers this week outside the elementary. On Tuesday, after Tigrek distributed fliers for the first time, Mequi sent him an e-mail warning him to stop or “the district has the legal right to restrict your access to school

Tigrek returned to the school Wednesday and snapped photos of security officers stationed there, prompting complaints from parents, according to the school district.

In an e-mail Thursday, Principal Kiemele told Mequi, the school district’s attorney, that if Tigrek’s goal is to “get me fired .. then his intent is destructive, and I would need your assistance.” Mequi said the district could restrict the father’s access to the school.”But no decision has been made,” she said. LINK H/T Harry