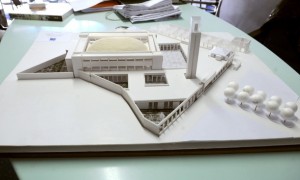 This photo shows the architectural model for the Grande Mosque of Marseille, designed by architect Maxime Repaux on April 30, 2009 in Marseille. Those in charge of the Association for the Grand Mosque of Marseille announced yeterday that the construction of the Mosque would start in December 2009 and indicated that they hoped to raise ‘3 to 4 million euros’ (4 to 5.3 million US dollars) to finance the opening of the site, out of the global budget of 22 million euros (29 million US dollars). AFP PHOTO/MICHEL GANGNE (Photo credit should read MICHEL GANGNE/AFP/Getty Images)