Genesis 12:2-3: [The LORD speaking to Abraham, said] “I will make unto you a great nation and I will bless you…. I will bless those who bless you, and whoever curses you I will curse….”

FRONT PAGE MAGZINE (Joseph Klein) ‘The Quislings of Norway,’ posted a few days before the terrorist massacre. The infamous Norwegian Vidkun Quisling, who assisted Nazi Germany as it conquered his own country, must be applauding in his grave. In the latest example of Norwegian collaboration with the enemies of the Jews, Norwegian Foreign Minister Jonas Gahr Stoere declared during a press conference this week, alongside Palestinian President Mahmoud Abbas, that “Norway believes it is perfectly legitimate for the Palestinian president to turn to the United Nations” to seek recognition of an independent Palestinian state.

Despite Abbas’s decision to throw his lot in with the Hamas terrorists as part of some sort of “unity” government, Stoere signed an agreement with Abbas on upgrading Palestinian representation in Norway. Under the agreement, which effectively rewards Abbas for joining forces with Hamas, the Palestinian representative will have the full diplomatic rank of ambassador.

The foreign minister of Norway, which chairs a group of Palestinian donor nations, also used the occasion to hold the tin cup out for Abbas. Foreign Minister Stoere chided those who have decided to hold back on their contributions. “All donors should make an extra effort to support the Palestinians this summer and autumn,” he said.

None of this should come as a surprise. Let’s not forget, for example, that Foreign Minister Stoere is in charge of the same Norwegian Ministry of Foreign Affairs in which Socialist Ingrid Fiskaa — who said in April 2008 that she sometimes wished the United Nations would send “precision-guided missiles against selected Israeli targets” — so proudly serves as a state secretary.

During the Nazi occupation of Norway, nearly all Jews were either deported to death camps or fled to Sweden and beyond. Today, Norway is effectively under the occupation of anti-Semitic leftists and radical Muslims, and appears willing to help enable the destruction of the Jewish state of Israel. 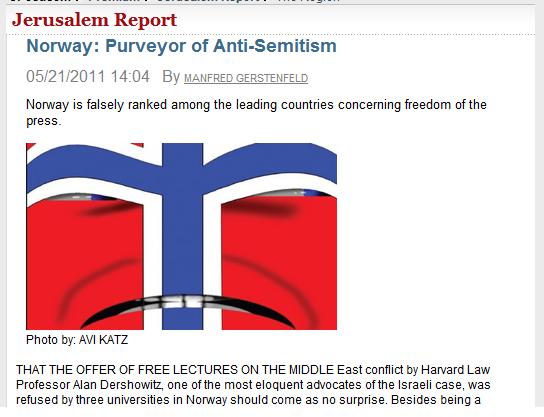 For example, one of Norway’s leading intellectuals, Jostein Gaarder, published an op-ed article in a major Norwegian daily newspaper in 2006 arguing against recognizing the state of Israel in its current form and claiming that Judaism is “an archaic national and warlike religion.”

Gaarder equated the Jewish state of Israel’s attempts to defend itself against Islamic terrorists with apartheid and ethnic cleansing:

The State of Israel has raped the recognition of the world and shall have no peace until it lays down its arms.

Norway’s Labor Party lawmaker Anders Mathisen has gone even further and publicly denied the Holocaust. He said that Jews “exaggerated their stories” and “there is no evidence the gas chambers and or mass graves existed.” While the Norwegian political establishment and opinion-maker elite may not have reached that point of lunacy just yet, they do tend to treat Muslims as the victims of Israeli oppression – as if today’s Muslims are filling the shoes of the Jewish victims of the Holocaust and today’s Nazis are the Israelis.

Thorbjørn Jagland, former prime minister of Norway, the president of the Norwegian Parliament, and the head of the Nobel Prize committee that gave President Obama the Nobel Peace Prize, sided with Turkey and condemned Israel for the defensive actions it took last year against the so-called Free Gaza flotilla.

Socialist leader Kristin Halvorsen has been leading the boycott Israel campaign. While serving as Norway’s finance minister, she was amongst the demonstrators at an anti-Israel protest, in which a poster read (translated): “The greatest axis of evil: USA and Israel.” Among the slogans repeatedly shouted at the demonstration was (as translated) “Death to the Jews!” 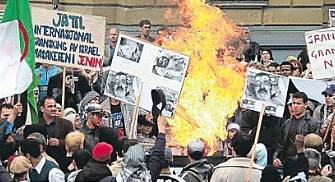 Halvorsen has recently supported a measure calling for military action against Israel if it decides to act against Hamas in Gaza, based on the reasoning that the world community’s credibility in confronting the Qaddafi regime would be undermined if it does nothing to help Hamas repel Israeli air attacks in Gaza.

Last year, the Norwegian government decided to divest from two Israeli entities working in the West Bank. Norway’s sovereign wealth fund divested from the Israeli company Elbit, because it has worked on the Israeli security fence that keeps out Palestinian suicide bombers. Israel has also been blocked from bidding for Norwegian defense contracts.

The state-owned TV NRK aired the one-sided movie “Tears over Gaza,” photographed by several Palestinian cameramen during and after Israel’s Operation Cast Lead. Its film director Vibeke Løkkeberg had the gall to compare Israel’s defensive military actions in Gaza, which protect Israeli civilians from Hamas bombs, to “the massacres Qaddafi is conducting against Libyan insurgents.”

As explained by Bruce Bawer, an American literary critic, writer and poet who lives in Norway and has criticized European anti-Semitism and radical Islam, in an interview with the Jerusalem Post, contemporary Norwegian anti-Semitism is alive and well in Norway especially amongst “the cultural elite – the academics, intellectuals, writers, journalists, politicians, and technocrats.”

It is such anti-Semitic tripe and moral equivalency that embolden the Muslims living in Norway to legitimize their own anti-Semitic conduct, which Norwegian officials have been tolerating in the name of multiculturalism.

Part of the motivation for this anti-Semitism is the influx into Norway in recent decades of masses of Muslims from Pakistan, Iraq, Somalia and elsewhere. Multiculturalism has taught Norway’s cultural elite to take an uncritical, even obsequious, posture toward every aspect of Muslim culture and belief. When Muslim leaders rant against Israel and the Jews, the reflexive response of the multiculturalist elite is to join them in their rantings. This is called solidarity.

In 2009, when Muslims rioted violently in downtown Oslo to protest Israel’s actions against Hamas, resulting in extensive damage, there were few consequences for those responsible.

Teachers at schools with large shares of Muslims reported that Muslim students often “praise or admire Adolf Hitler for his killing of Jews,” that “Jew-hate is legitimate within vast groups of Muslim students” and that “Muslims laugh or command [teachers] to stop when trying to educate about the Holocaust.”

Norway is repeating its Quisling treachery of the Nazi era, this time in league with a growing radical Muslim population. And once again the Jews are the victims.

From Anders Behring Breivik ‘s manifesto, which speaks for itself as to whom he was considering an alliance with. And it certainly wasn’t the Tea Party or Jihad Watch:

“An alliance with the Jihadists might prove beneficial to both parties… We both share one common goal.”

“They are asked to provide a biological compound manufactured by Muslim scientists in the Middle East. Hamas and several Jihadi groups have labs and they have the potential to provide such substances. Their problem is finding suitable martyrs who can pass “screenings” in Western Europe. This is where we come in. We will smuggle it in to the EU and distribute it at a target of our choosing. We must give them assurances that we are not to harm any Muslims etc.”

“There might come a time when we, the PCCTS, Knights Templar will consider to use or even to work as a proxy for the enemies of our enemies. Under these circumstances, the PCCTS, Knights Templar will for the future consider working with the enemies of the EU/US hegemony such as Iran (South Korea is unlikely), al-Qaeda, al-Shabaab or the rest of the devout fractions of the Islamic Ummah with the intention for deployment of small nuclear, radiological, biological or chemical weapons in Western European capitals and other high priority locations.”

“Justiciar Knights and other European Christian martyrs can avoid the scrutiny normally reserved for individuals of Arab descent and we can ensure successful deployment and detonation in the location of our choice.”