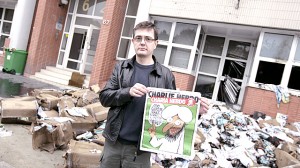 The Charlie Hebdo’s publisher, known only as Charb, shows a special edition of French satirical magazine Charlie Hebdo on November 2, 2011 in Paris, in front of the magazine’s offices which were destroyed by a petrol bomb attack overnight. The fire at the weekly magazine started around 01.00 am (0200 GMT) and caused no injuries, a police source said. Charlie Hebdo published a special edition on November 2 to mark the Arab Spring, renaming the magazine Charia (Sharia) Hebdo for the occasion, to “celebrate” the Ennahda Islamist party’s election victory in Tunisia and the transitional Libyan executive’s statement that Islamic Sharia law would be the country’s main source of law. The cover features a cartoon of the prophet, saying: “100 lashes if you don’t die of laughter!”. AFP PHOTO / ALEXANDER KLEIN (Photo credit should read ALEXANDER KLEIN/AFP/Getty Images)