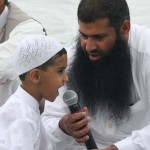 The uproar that resulted in the removal of a Hajj banner at the Muslim American Society of Staten Island, NY is a sign of the “near hysteria” nationwide over anything related to Islam,  a spokesman for the Council on Islamic American Relgions (CAIR) said. (Gee, if the barbaric removal of an innocent Christian grandmother’s head by […]

School children practicing the sacrificial slaughter of animals, good training for the beheadings they will be expected to carry out when they get a little older. h/t Martin Think I’m kidding? This Pakistani kid is 12 years old.

Not sure if this is the ‘work’ of ISIS or al-Nusra Front terrorists. Two car bombs were exploded in the central Syrian city of Homs on Wednesday afternoon near a school killing at least 48 people including 41 children. Middle East Eye  (h/t Martin) The explosions took place as children were leaving school at the end of […] 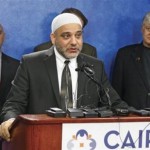 Breitbart News was able to secure through direct URLs the past two Friday Khutbahs (sermons) preached at the ISGOC (Islamic Society of Greater Oklahoma City), which are believed to have been deleted from the Mosque’s website shortly after Islamic radical Alton Nolen (aka Jah’Keem Yisrael) beheaded an innocent woman at his workplace. Breitbart News (h/t Mike F) has found […] 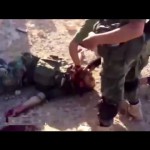 Islamic State beheaded seven men and three women in a northern Kurdish area of Syria, a human rights monitoring group said on Wednesday, part of what it described as a campaign to frighten residents resisting the militant group’s advance. Reuters (h/t Martin)  The head of the Syrian Observatory for Human, Rights Rami Abdulrahman, said five anti-Islamic State Kurdish fighters, including […] 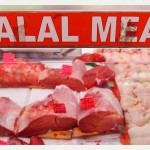 Sandra Hill, from Mickleover, wrote to the Derby Telegraph after going into a local Tesco and finding halal meat being advertised in big letters. Halal is essentially meat that Muslims are allowed to eat according to Islamic law and must be prepared in certain way: It involves a cut to the neck of the unstunnned […] 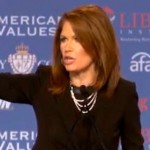 “Yes, Mr. President, it ‘is’ about Islam!” she said as the audience applauded wildly. At the 2014 Value Voters Summit, Congresswoman Michele Bachmann (R-MN) claimed that there is no such thing as “moderate” Islam, and that President Barack Obama failed the American people by deciding not to declare war on it.  Raw Story  “In their fantasy […]

This Israeli child has Williams Syndrome. Williams Syndrome is a genetic condition that is present at birth and can affect anyone.  It is characterized by medical problems, including cardiovascular disease, developmental delays, and learning disabilities. WS affects 1 in 10,000 people worldwide. h/t Liz