Yes, let it not be a messy beheading with a dull knife that has become the trademark of Muslim terrorists. Shoebat  Pope Francis was recently asked by Father Jose Maria “Pepe” di Paola of the Argentinian news outlet, La Carcova, about “Muslim terrorists who want to kill you”, that is, on the death threats made by ISIS towards him, and he responded that he told God that if ISIS does kill him, to please make it a painless death. His quote is:

“I have said to the Lord: take care of me. But if your will is that I should die or that they do something to me, I ask you one favour: that they don’t hurt me… I’m a real scaredy cat when it comes to physical pain.” ISIS is targeting Pope Francis, calling him the “bearer of false truth.” According to an Italian source, ISIS is not only setting their sites on the Vatican, but more specifically, on Pope Francis himself. Italian authorities have already issued an alert giving warnings on places that our potential targets to terrorist, and one on the list, being very significant, was “places of worship,” which would include the Vatican. It has been reported that at least 50 people from Italy are now fighting for ISIS, 80% of whom are native Italians who converted to Islam. One of the reasons for their conversion, according to one Italian newspaper, was “distrust in the Catholic Church,” indicating the connection between Islam and anti-Catholicism. Most interestingly, the goal to force the Vatican to become Muslim was recently stated by an ISIS agent in Italy named Imam Ismar Mesinovic, a Bosnian Muslim who stationed himself in the country to recruit Italian converts to fight for ISIS. He said: “We Muslims believe that one day the whole world will be an Islamic state. Our goal is to make sure that even the Vatican will be Muslim. Maybe I will not be able to see it, but that time will come.” 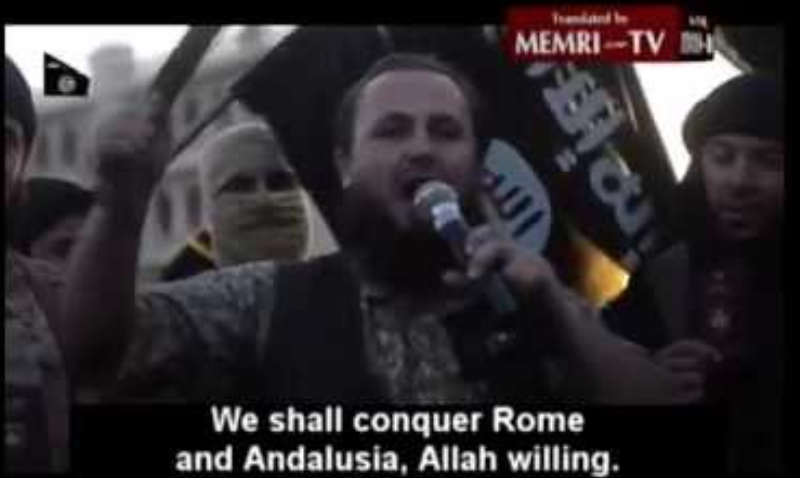 ISIS threatens they will conquer Rome: