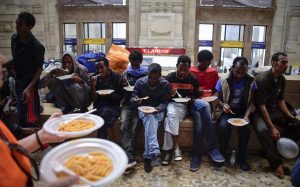 That seems to be the only way the Italian government will help anyone these days. Illegal alien Muslim invaders are pouring into Italy where they get housing, food, spending money and healthcare…and don’t have to do any work. Illegal aliens posing as refugees receive better treatment than native Italians at the expense of Italian taxpayers.