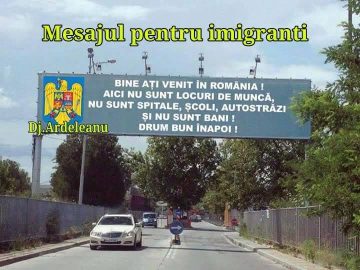 As is the case wherever there are Muslim illegal aliens posing as asylum seekers, violence and rape are rampant at the migrant center in Bucharest that housed 200 illegals and had only two employees per shift. This sign at Romanian border reads: Muslim asylum seekers: “There is no work, no money, no hospitals, no schools for you. GO HOME!”

GOV  One Afghan invader attempted to rape an underage (8-year-old) Afghan girl; another repeatedly punched and kicked a policeman because the policeman told the migrant wannabe that he wasn’t allowed to smoke in that area. The two Muslim illegals left the center after the event, instead of being held in police custody, and are still at large.

ROMANIANS protest against construction of a mega-mosque in Bucharest