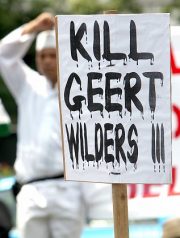 Muslims in London want to know why the police won’t allow Wilders to come out and face them for a few minutes, just long enough for them to cut off his head. After all, according to the “holy” quran, they have the right to kill anyone who insults their so-called prophet Muhammad and Wilders certainly more than qualifies.

Not to worry, you IslamoNazi welfare squatters, at the rate the UK is going, you will have your Islamic State there in a few decades and you can behead anyone you want.