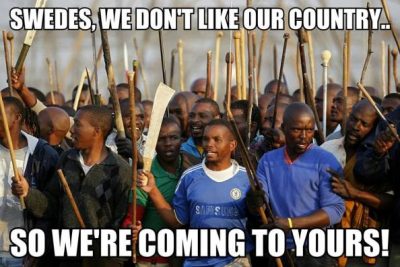 It’s like a war zone in parts of Sweden, rife with  multiculturalism they say – but what they mean is muslimculturalism, if you can even call it a culture – which infects its host nation with violence, rape, bombings, and as much as 90% welfare dependency. But you won’t hear about this in the Western media, probably because people aren’t even hearing much about it in the Swedish media.

Voice of Europe reported that Sweden has suffered through  13 bombings in 25 days). They called it a war zone. The entire country has just under 10 million people while New York City has 8 and-a-half million.

Independent Sentinel  Check out the police reaction below. According to the officer, if you complain, you’re a Nazi.

This is a Swedish police officer. He just wrote that if you are concerned about all the bombings in Sweden, "you are that sort" (IE a Nazi) pic.twitter.com/KwkopBTr9X

According to the Voice of Europe report: Earlier this month, the attacks have included: an attack on the police station in Malmö, on a multi-family apartment complex, and a car bomb. The most recent attack that occurred on 2 November, was on a nightclub restaurant in Malmö. The Babel nightclub’s front entrance was destroyed by the bomb. There were no injuries in this attack.

Yet ANOTHER car bomb in SWEDEN: Car blown up amidst shooting. This is the 13th bomb in just 25 days in Sweden. https://t.co/YbtKskqOad pic.twitter.com/Z2SPRtNJDb

BREAKING: Now yet another bomb in Sweden. Package exploded in Stockholm when someone collected it.