Muslim girls’ school in the UK has received the lowest Ofsted rating available after inspectors discovered that pupils were not provided with toilet paper for Islamic “cultural reasons.”

UK Telegraph  (h/t TROP) Staff at the Park Avenue Girls’ High School, in Stoke-on-Trent, said paper was available from the school office, but because most of the students were Muslim, they preferred to wash rather than wipe. 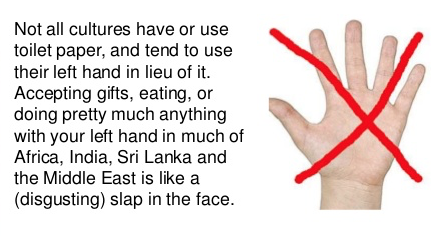 The Ofsted report stated: “At the time of the inspection, it was not the school’s common practice to provide soap for pupils’ hand-washing, toilet roll in the toilets or suitable drinking water.

“Toilet paper is available from the school office when pupils request it. Pupils told inspectors that they sometimes avoided using toilets for the whole school day because of this.” But headteacher Abdul Ghafoor Salloo defended the policy, insisting the school catered for the cultural needs of the pupils. 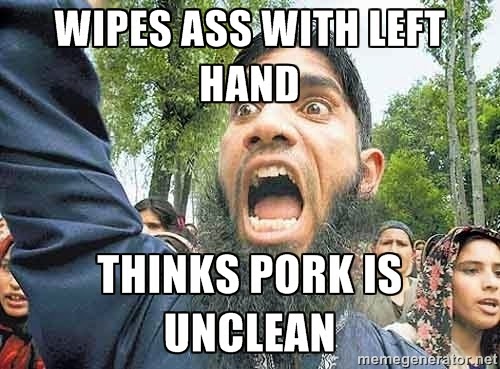 “The children they do use the toilets and traditionally, because we are Muslim, we wash, not only wipe. There are facilities for pupils to clean themselves,” he said.  It might be hard for someone who doesn’t traditionally wash to understand and washing is better than wiping clean.

ITALY: Muslim man washes his anus at a public fountain in the street after taking a dump in the alley:

1. When going to the toilet, do not touch the private parts with the right hand. (Muslim)
2. Do not cleanse the private parts with the right hand. (Muslim)
3. After relieving oneself, use three stones or three clods of clay. (Muslim)
4. When using the toilet, do not face or sit with the back towards the Qibla. (Bukhari)
5. When intending to urinate, find a suitable place of privacy. (Abu Dawood)
6. Do not urinate in stagnant water (water that does not flow). (Bukhari)
7. Do not urinate in a bathroom, as many a time due to this, evil temptations are aroused.(Tirmidhi)
8. Do not stand and urinate. (Tirmidhi)
9. Do not converse (with another person) whilst relieving oneself. (Musnad Ahmad)
10. Do not relieve oneself at riverbanks, roads and shady places where people walk or rest. (Abu Dawood)
11. Recite BISMILLAH before entering the toilet, as this will serve as a veil between the jinn and the private parts of humans. (Tirmidhi)
12. Do not perform istinja with bones or dung. (Tirmidhi)

RELATED STORY: UK Muslim chef prepared food after wiping his ass with his bare hands as he doesn’t use toilet paper for Islamic ‘cultural reasons’