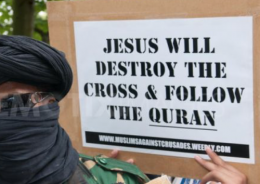 FLORIDA: JEW HATER vs JEWISH REPORTER at a designated terrorist group CAIR’s Islamic ‘Day of Rage’ protest over Trump’s decision to recognize Jerusalem as Israel’s capital. This video, from the TheUnitedWest, is a short expose’ of what a majority of Muslims in America really think.

The United West team was verbally harassed by one the Jew-hating Arab Muslims there who tells reporter:”I used to be a Jew” in between his foul-mouthed rapid-fire chants of “Jesus killer” and “baby killer.” (His Arabic accent, name, and fluency in Arabic, belies that allegation)

FYI: The irony is that Islamic doctrine does NOT believe that Jesus died on the cross so this “Jesus Killer” chant is used by hate-filled Muslims to put a wedge between evangelical Christians and Israelis.