A coalition between two right wing parties – the anti-establishment Austrian People’s Party and the anti-Muslim immigration Austrian Freedom Party – sworn into office on December 18th, is poised to catapult Austria to the vanguard of Western Europe’s resistance to mass migration from the Muslim world. 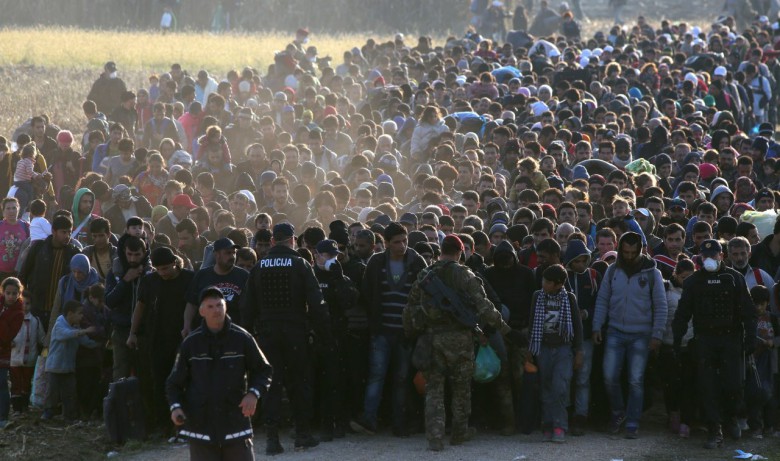 Gatestone  (h/t Marvin W) The anti-immigration Austrian People’s Party and the anti-establishment Austrian Freedom Party have reached a deal, creating a new coalition to govern Austria for the next five years.

Chancellor-elect Sebastian Kurz, 31, who won Austria’s national election on October 15 after campaigning on a promise to halt illegal immigration, will govern with Heinz-Christian Strache, 48, the Freedom Party leader, who has warned that mass migration is “Islamizing” Austria.

Under the agreement, Strache will become the vice-chancellor; the Freedom Party will also take control of the ministries of defense, interior and foreign affairs.

Kurz has been a strong critic of German Chancellor Angela Merkel’s open-door migration policy, which has allowed more than a million mostly male migrants from Africa, Asia and the Middle East to enter the country during the past two years.

The new law requires immigrants from non-EU countries to sign an “integration contract” which obligates them to learn written and spoken German and to enroll in courses about the “basic values of Austria’s legal and social order.” Immigrants are also required to “acquire knowledge of the democratic order and the basic principles derived from it.” 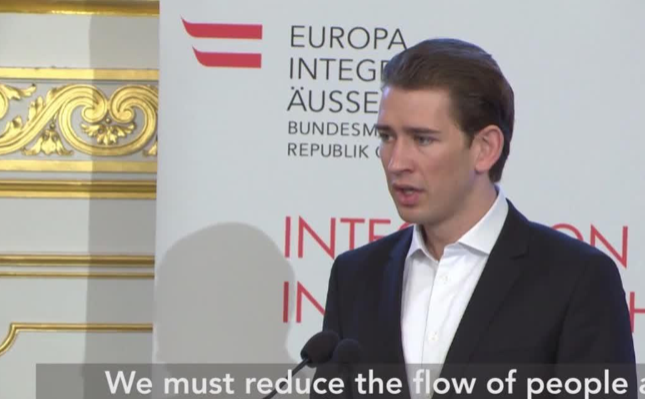 Previously, Kurz was instrumental in reforming Austria’s century-old Islam Law (Islamgesetz), governing the status of Muslims in the country. It stresses that Austrian law must take precedence over Islamic Sharia law for Muslims living in the country. 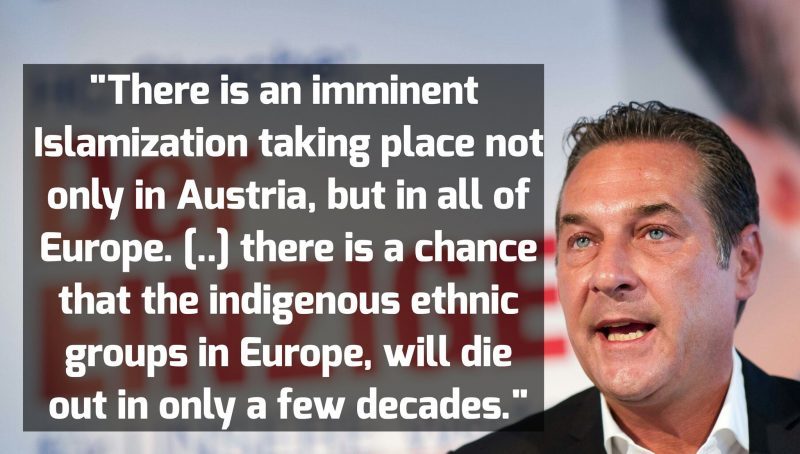 At the same time, Austria has emerged as a major base for radical Islam. Austria’s Agency for State Protection and Counterterrorism (BVT) has warned of the “exploding radicalization of the Salafist scene in Austria.” Salafism is an anti-Western ideology that seeks to impose Islamic Sharia law.

“The immigration seen in recent years is changing our country not in a positive but in a negative way,” said Kurz, who campaigned on a “law and order” platform: “Uncontrolled immigration destroys the order in a country.”

During his time as foreign minister, Kurz was instrumental in garnering parliamentary approval of a groundbreaking new law that regulates the integration of immigrants.

How different from the last Austrian president who called for ALL women to wear the Islamic supremacist headbag to show solidarity with Muslim women and as a countermeasure to growing “Islamophobia.”

Heinz-Christian Strache, a strong supporter of Israel insists that anti-Semitism had no place in his party and has urged a common front against Islamists. He has also pledged “to ensure that boycotts [against Israeli products] get taken off the agenda.” 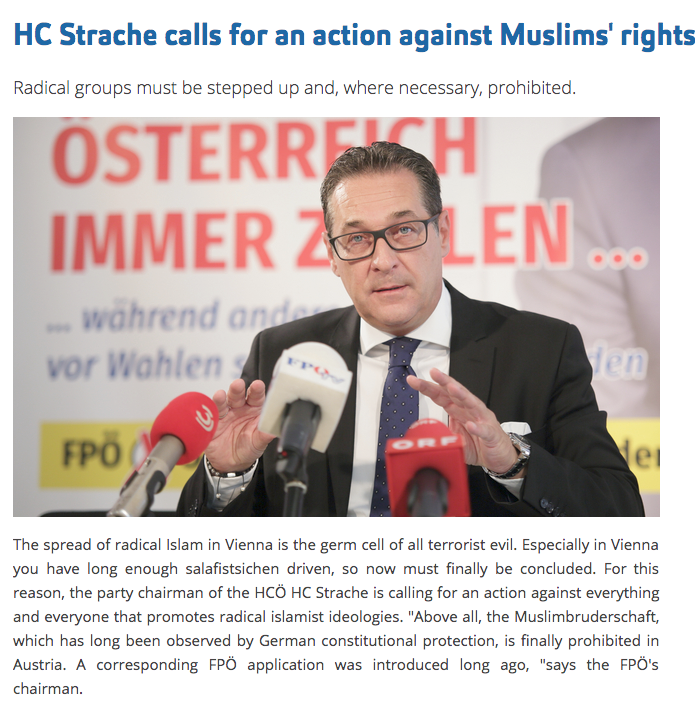 “For us, it’s important to act against anti-Semitism, and also against Islamism and terrorism, and to discuss the issues we have in common. Anti-Semitism often emerges anew from Islamism and from the left.

“We have a lot in common [with Israel]. I always say, if one defines the Judeo-Christian West, then Israel represents a kind of border. If Israel fails, Europe fails. And if Europe fails, Israel fails.”

Strache has called Angela Merkel “the most dangerous woman in Europe” because of her migration policies, and has repeatedly said that Islam is “not part” of Austria. 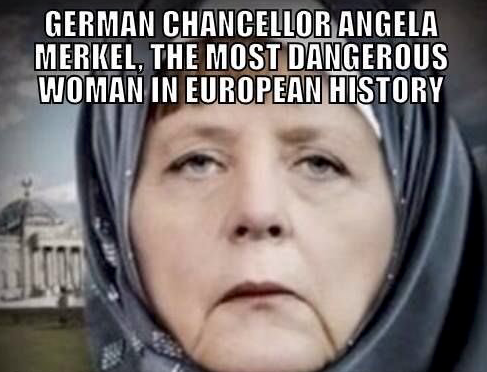 Strache has also warned that the “uncontrolled influx of migrants who are alien to our culture, who seep into our social welfare system … makes civil war in the medium-term not unlikely.” A Eurosceptic, Strache has called the European Union a “bureaucratic monster” and has said that Britain will “probably be better off after Brexit.”

At Strache’s insistence, Karin Kneissl, an independent Middle East expert who speaks eight languages, including Arabic and Hebrew, will become Austria’s new foreign minister. Kneissl has been a vocal critic of EU Commission President Jean-Claude Juncker, whom she has described as the “Caesar of Brussels.” She has also criticized Merkel’s migrant policy as “grossly negligent.”

Kneissl has said that most of the “refugees” arriving in Europe are overwhelmingly young males between the ages of 20 and 30 who are “economic migrants controlled by testosterone.” In an interview on Austrian television, Kneissl said that one of the main reasons for the revolts in the Arab world was “many young Arab men can no longer find a wife because they have neither work nor their own home, and thus cannot achieve the status of a man in a traditional society.”

A 180-page document explains the new government’s agenda between now and 2022. It promises to crack down on political Islam; to crack down on illegal immigration; to speed up asylum decisions and to sponsor an EU summit on immigration when Austria holds the EU presidency in the second half of 2018.

In addition, the document promises to: require migrants to learn German; require migrant kindergartners who have insufficient German language skills to repeat kindergarten before progressing to the first grade; increase the legal penalties for sexual crimes; strengthen Austrian defense; hire more police officers; reduce the bureaucracy and not raise taxes.

Some observers have said that Kurz’s professed commitment to the European Union was aimed at calming worries in Europe about the Freedom Party’s Euroskeptic and anti-Islamization policy objectives.

Kurz has nevertheless pledged to reject the European Union’s compulsory migrant quota. “I will work towards changing this erroneous refugee policy,” he said. “Without the proper protection of the external borders of the EU, we will not come to grips with the problem of illegal migration.”