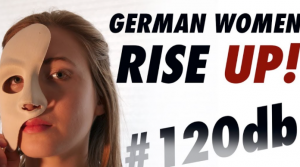 We have been silent for too long. We blame the government and its lethal immigration policies for allowing this scourge of violent Muslim reprobates, thugs, and rapists to terrorize us in our streets. And we blame the feminists who make excuses for them. No one is standing up for the women of Germany, so we must rise up and defend ourselves, however we can.