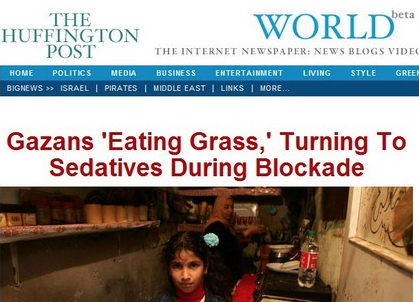 Not so fast. Take a look at this video in Arabic from al-Jazeera, translated by MEMRI, which shows you the real situation in Gaza, which the mainstream media would rather you not see.

If the situation in Gaza is as bad as many Western journalists and diplomats want you to believe, then why is Gaza’s life expectancy (74.2 years) now five years higher than the world average? The World Health Organization has listed people in Gaza and the West Bank as among the most obese in the world, with women ranking #3 (5 places higher than the U.S.) and men ranking #8 for highest obesity rates.

So where are all the starving Palestinians?  Probably at the bustling, well-stocked glitzy shopping malls, the impressive children’s water park, the fancy restaurants and private clubs, the luxury hotels, the crowded food markets, and toy shops brimming with the latest plush toys.