Although Trump promises “extreme vetting,” many Muslim refugees come as children and become radicalized years later. Somali Muslim migrant crime rivals Somali terrorism as a major problem in the United States, and the two clearly blur into one another. 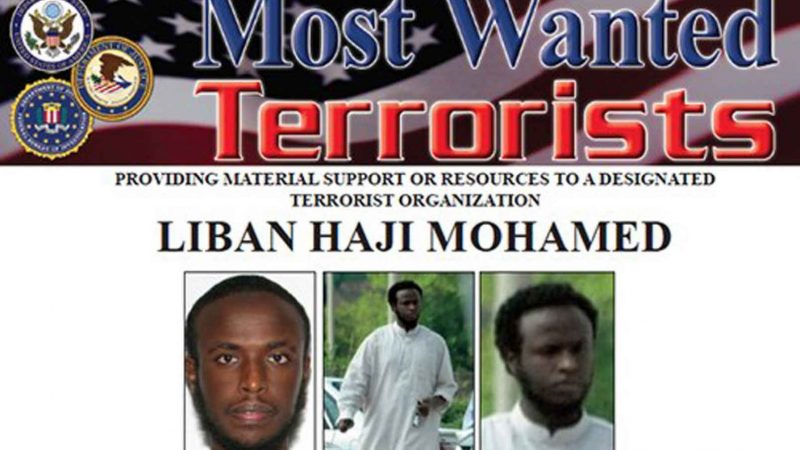 Frontpage  (h/t Marvin W) The problem is leaking from Minnesota into South Dakota — as Lutheran Social Services has resettled more than 4,500 Somalis in Sioux Falls. Many of the Somalis have migrated from Sioux Falls to the city of Aberdeen in search of work at Demkota Ranch Co.’s beef-packing plant. 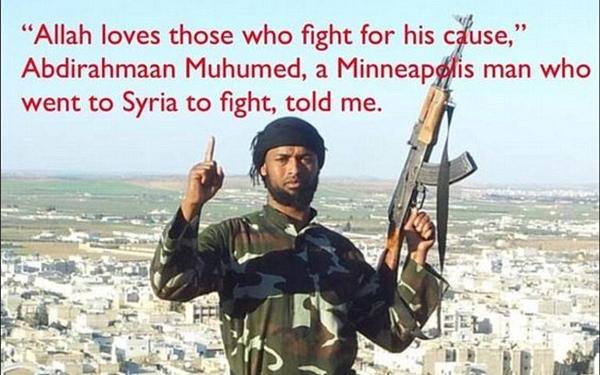 South Dakota State Senator and GOP congressional candidate Neal Tapio is leading perhaps the nation’s most aggressive effort to expose the danger and fraud of refugee resettlements. Tapio has introduced several bills that seek to rein in high-risk resettlements in his state. 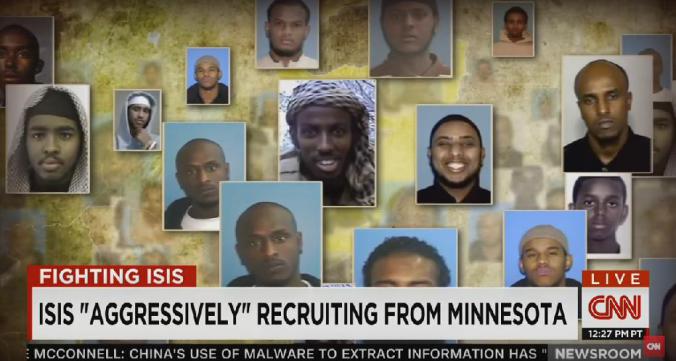 “While many people see compassion to serve the less fortunate, the truth is the Somali community has not been able to assimilate and has proven to be a major terror threat in the United States,” Tapio said.

Consider the following 25 incidents that should raise red flags about refugee resettlement from this perpetually war-torn country:

[1] The Somali man who knifed two men in November at the Mall of America was not involved in an attempt to steal clothing – a false narrative put out by Bloomington police – but was actually carrying out jihad. He admitted it in a detailed statement to the court. Mahad Abdiraham said he went to the mall that day to “answer the call for jihad.”

[2] A Somali refugee who had just arrived in Aberdeen for a meatpacking job was convicted last year of trying to sexually assault a wheelchair-bound woman at a group home. Liban Mohamed, 39, found the vulnerable woman sitting outside the home and he was caught reaching up between her legs.

[3] Also in Aberdeen, Abdirhman Noor, 24, shot at two men outside the Foxridge Apartments, wounding one critically. Noor, who came to the U.S. as a child refugee, was charged with attempted murder and released on $50,000 bail. He never showed up for his March 2017 court hearing and remains at large.

[4] A 73-year-old Meals on Wheels volunteer was dropping off meals at a homeless shelter in Shelburne, Vermont, when she was attacked by 32-year-old Somali migrant Abukar Ibrahim with a machete in early January 2018. She sustained multiple injuries including a severe leg wound.

[5] Tnuza Jamal Hassan, a 19-year-old woman from either Somalia or Ethiopia (Minneapolis police wouldn’t release her status), was arraigned last month on charges of first-degree arson after she allegedly set fires on the campus of St. Catherine University. Hassan told police she “wanted the school to burn to the ground” and that her intent was to “hurt people,” according to charges filed in Ramsey County District Court. Hassan told police she had written a letter to her roommates containing “radical ideas about supporting Muslims and bringing back the caliphate.” The prosecution further alleges “[s]he told the police and fire investigators ‘You guys are lucky I don’t know how to build a bomb because I would have done that,’” the Star-Tribune reported.

[6] Morgan Evenson, 24, was attacked just before Christmas while walking home from work in Minneapolis. She was stabbed 14 times by a man described as Somali. That man remains at large and the Minneapolis police falsely described the attack as a failed robbery. Evenson said he never reached for her purse.

[7] On July 15, 2017, a Somali refugee serving as a Minneapolis police officer, Mohamed Noor, shot and killed an unarmed woman, Justine Damond, who had called 9-1-1 to report a rape taking place outside her apartment. No charges have been filed against Noor, who had three previous complaints about his treatment of women while on patrol.

[8] Dahir Ahmed Adan stabbed 10 shoppers at the Crossroads Mall in St. Cloud, Minnesota, on Sept. 17, 2016. The refugee asked shoppers if they were Muslim. If they said “no,” he attacked them with his knife, until he was shot dead by an off-duty cop.

[9] In December 2016, Somali refugee Mohamed Ayanle, 22, was charged with first- and third-degree criminal sexual conduct after he allegedly raped a woman while riding a bus through Polk County, Minnesota. Ayanle reportedly forced her to have sex with him at knifepoint in the back of the bus. Ayanle had just arrived in Minnesota from Somalia three months prior to his arrest.

[10] Davee Devose, a promising 21-year-old black student at St. Cloud Technical and Community College, was stabbed to death at a house party in June 2015 by then-16-year-old Muhiyadin Mohamed Hassan, a Somali refugee who violated his juvenile probation and has since been moved to the adult system.

[11] In 2008, the government revealed thousands of Somali families had fraudulently entered the U.S. as “refugees” by lying on their applications that they were to Somalis already living in the U.S. The Wall Street Journal originally reported on how this fraud was uncovered by DNA tests, which led to a four-year closure of the so-called P-3 family reunification program for refugees coming from East Africa. The program was eventually restarted and none of the thousands of Somalis proven to have entered the U.S. by these fraudulent means were ever deported.

[12] On the day after Memorial Day, May 31, 2016, in Lawrenceville, Georgia, a Somali refugee woman, Aisha Ibrahim, 31, appeared out of the woods wearing a burqa and beat an American woman with her own American flagpole.

[13] A federal appeals court in December 2016 upheld the conviction of Mohamed Mohamud, the Somali refugee sentenced to 30 years in prison for plotting to bomb downtown Portland, Oregon, during the annual Christmas-tree lighting.

[14] In 2013, Somali refugee Omar Mohamed Kalmio in North Dakota was sentenced to life in prison for the 2011 murder of a Native American family he had become involved with.

[15] In November 2016, Abdul R. Ali Artan, an 18-year-old Somali refugee and student at Ohio State University, wounded 11 people at OSU in a car and knife attack. Minutes before his attack, Artan posted on Facebook his hatred for the United States.

[16] In April 2011, Somali refugee Said Biyad was sentenced to life in prison for murdering his four children in Louisville, Kentucky. He avoided the death penalty by taking a plea agreement.

[17] In July of last year, Somalia native Abdinzak Ahmed Farah, 29, was arrested and charged with threatening his fellow Minnesotans with a knife. According to an eyewitness, Farah was eating raw beef with the knife and holding it out to patrons, asking them to play games. In a July 25 article, the Faribault Daily News reports a complaint filed in Rice County Court alleges Farah was pointing a knife and threatening to kill anyone who called police. Witnesses said Farah was twice told to leave, but began chasing several people and threw the knife at them.

[18] At least 40 Somali refugees have left the country to join overseas terrorist organizations such as al-Shabaab in Somalia and ISIS in Syria, the FBI has confirmed. Dozens of others have been charged and/or convicted of providing material support to terrorists.

[19] One of the top terror recruiters for ISIS in the U.S. was Mohamed Hassan, a Somali refugee with roots in Minnesota. He turned himself in to authorities in Somalia in late 2015, after leading dozens of Somali-Americans to join ISIS. He also played a role in the terror attack on Garland, Texas, in which two Muslims planned to kill participants in a “Draw Muhammad” contest and behead activist Pamela Geller.

[20] Dozens of large-scale khat busts have taken place in recent years, such as this seizure of 69 pounds of khat at the Philadelphia airport bound for Minneapolis, and this one sending nearly 20 pounds to Minneapolis. Khat is a stimulant chewed by Somali men.

[21] In June 2016, residents of the Linden Hills community in Minneapolis were terrorized by a Somali mob for three straight days. They raided the waterfront community and pretending to shoot women on the beach, ran their cars over lawns while screaming “jihad,” threatened to rape one woman and beat one resident’s dog. Police were called repeatedly but never could make it to the scene before the Somalis disappeared.

[22] Minneapolis Police Department has for years tolerated an active Sharia cop, who married a Somali woman and patrols the Cedar Riverside area making sure Somalis are complying with Islamic dress codes and other Sharia rules.

[23] Liban Haji Mohamed, a naturalized U.S. citizen born in Somalia who came to the U.S. as a child refugee, was named to the FBI’s list of Most Wanted Terrorists in January 2015. Mohamed, who worked as a cab driver in northern Virginia, was charged with providing material support and resources to al-Qaeda and al-Shabaab.

[24] In May 2015, a UK media outlet broke the story that one of the Islamic State’s major recruiters turned out to be a female journalism student in Seattle who liked football, cheeseburgers, and convincing women in Syria and the EU to wage jihad. The student, a Somali named Rawdah Abdisalaam, was discovered to be working as a senior recruiter while living the good life in Seattle.