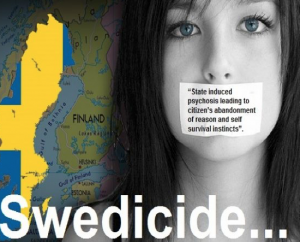 SWEDEN’s suicidal Muslim migration policy is predicted to turn Sweden into a third world country within a few decades. That, plus the Swedish government’s feminist leadership, has made Sweden into the rape capital of the world, where Swedish women are dyeing their hair dark to make them less of a target to Muslim men.

Mass-immigration of Muslims is destroying the values that the Swedish left, the social democrats, worked so hard to establish. The establishment has successfully transformed Sweden in to an unsafe place where traditional liberal values of freedom and equality are abolished.