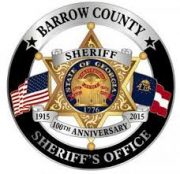 The Barrow County Sheriff’s Office is hosting a course on “Islam in America,” but its description has raised concern from CAIR – a radical Muslim activist and advocacy group. The curriculum includes instruction about “The Muslim Brotherhood in America, Islamic Ideology and its challenges to U.S. law enforcement and our constitution.” 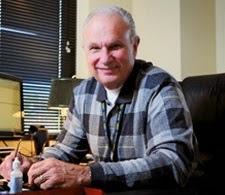 MYAJC  “This course is to learn the jihadist enemy,” according to a description of the course. “How they define themselves by documents and social media, the historical basis to justify their actions, and their inspirations. This course also covers the Grand Jihad to eliminate America by terrorist acts and subversive acts under the Muslim Brotherhood.”

The March 8 training course will taught by former Woodstock Police Department Chief David Bores (photo above) and is open to law enforcement and the faith community. Bores could not be reached for comment.

Edward Ahmed Mitchell (below), executive director of the Georgia chapter of the Hamas-linked Council on American-Islamic Relations (CAIR), said the course description is disturbing. Bores has been in public service for more than 45 years, according to information on the sheriff’s office website.

Mitchell said people have a right to express their views, even if its unfavorable to Muslims “but they do not have the right to do so while teaching official classes to law enforcement agencies on behalf of the State of Georgia.” (Muslims ARE the enemy) Mitchell said police officers “ must learn to serve and protect all Georgia residents, including over 100,000 Georgia Muslims. Racism and anti-Muslim bigotry have no place in a law enforcement training course.

Barrow County Sheriff Jud Smith, said he has taken courses by Bores before and denies Bores unfairly singles out Muslims. “If he was saying every Muslim in the world is a bad person and they want to kill us, I would stand up and say, ‘Brother, you are wrong’,” said Smith.

What Bores does talk about, said Smith, are different incidents and how to prevent Islamic terrorism. “He dissects those attacks and says here are the signs to look for so you’re not profiling,” Smith said. Bores is listed as director of intelligence for the Atlanta-based Defender Group, according to the organization’s website in 2016. It says company is made up of current, former and retired law enforcement professionals

Below is an outline  of the kind of training for Law Enforcement that Bores conducts:

Islamic Ideology: Does It Conflict with Our Law Enforcement Mission?

Course Description: Repeatedly we are told by members of the media, academic institutions, and elected officials that Islam is a religion of peace. We are also confronted with the reality of the recent past, in which organized groups of radical Muslims and so called “lone wolves” representing domestic Islamic extremists present a real and potentially violent threat to our communities.

Compounding these two positions of Islam is the fact that because Islam is a widely recognized and practiced religion, many believe we must automatically grant to it all the rights and privileges offered to other expressions of worship, lest we be accused of being politically incorrect, of being intolerant of multi-cultural beliefs, or worse, of being labeled Islamophobic.

Once again local law enforcement finds itself in the middle of a uniquely difficult situation, facing m any legal and social challenges inherent to policing in a free society. This training presents information on how to distinguish between peaceful Muslims and those that want to subvert our Constitution by imposing Sharia law.

Participants will have a better understanding of the various conflicting messages of Islamic theology; the historical roots that serve as its foundation; the key principals that govern how Islam should be understood; the evolutionary development of Jihad; and the major elements of Sharia law.

The program will present information about the current state of Islam with particular attention given to the activities of the Muslim Brotherhood and its supporters in the United States and their five stage plan for imposing their law in our country; how the stages of domestic radicalization process works based upon research done by the New York City Police Department; and how local law enforcement can effectively deal with the various Islamic threats to subvert our Constitution.

Instructor: David Bores – a 45 year veteran of the law enforcement profession, having filled a variety of leadership positions, supervising hundreds of men and women throughout his career. He was Chief of Police for the City of Woodstock, GA for almost three years and prior to that served as a senior staff officer with the Cherokee County Sheriff’s Office holding the rank of major over the agency’s headquarters division. He was also a commissioned officer for 23 years in the Army’s MP Corps, is a graduate of the Southern Police Institute, and holds two Master’s of Science degrees in criminal justice and public administration. He is an adjunct instructor of criminal justice at Kennesaw State University and has taught at Reinhardt and Georgia State Universities, and is a P.O.S.T. certified general instructor.

In 2003, CAIR released a Law Enforcement Official Guide in an effort to stop the profiling and “unfair” treatment of Muslims by law enforcement officials. 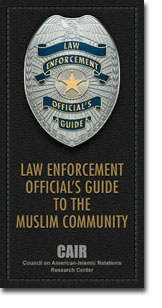 The guide contains basic information about Muslim beliefs and practices and addresses issues like sensitivity in body searches and entering Muslim homes, given the modesty requirements of the faith. Also included is advice on outreach to the Muslim community and the workplace rights of law enforcement officials who are also Muslims.

Not surprisingly, the guide is no longer available.