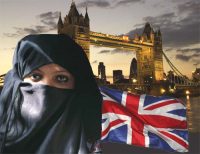 It was predicted the native (white Christian) population of Britain  would become a minority in their own country in around 40 or 50 years. But the effects of mass Muslim migration and high birth rates have shortened that timeframe considerably. It’s why being at an age that means you’re closer to death is not such a bad thing…unless you have children and grandchildren, who will soon feel life foreigners in their own country, if they can’t leave.