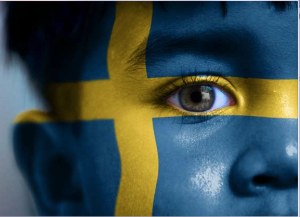 With the arrival of hundreds of thousands of Muslim invaders posing as refugees in the past few years, Swedish public schools are finding it nearly impossible to recruit teachers due to a lack of respect and safety in schools which have become hotbeds of Muslim harassment, violence, and sexual assaults on Swedish girls. 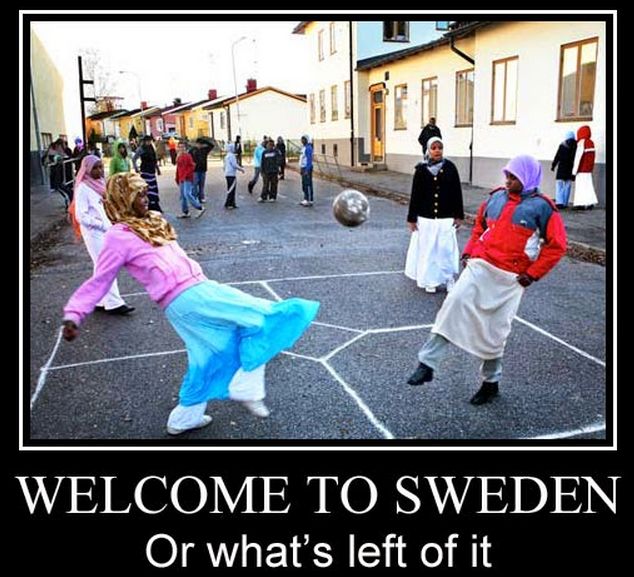 Voice of Europe  (h/t Maurice) Swedish schools are now planning on reinforcing security measures in schools due to the aggravated situation. There are a growing number of violent conflicts, often involving knives and other kinds of weapons. Last year, a 17- year old Afghani refugee was stabbed to death by another 17-year old Afghani pupil in a school in south of Stockholm.

But many serious incidents never reach mainstream media. Even schools that have previously been more or less calm are now ridden by severe problems, often connected to Muslim groups of different ethnicities and problems involving “honour”.

Principals  try to cover up those problems, trying to pretend everything is under control. But reports leak out and the picture is not pretty. The Swedish authorities are desperately trying to straighten up the situation. Predictions for the future are that there will be a huge shortage of qualified personnel in Swedish schools.

The numbers mentioned by Swedish government are as high as a shortage of 60,000 teachers for the coming years. One of the reasons is that fewer people are interested in working as teachers is the dangerous situation in schools as described above.

10NEWS  Ten schools are now under review, including Rörsjöskolan-Zenith and Augustenborgsskolan. At both schools classes are affected by noise, chaos and violence, and during breaks, it is not unusual to hear anti-white racist and homophobic jibes between students, according to one school leader.

At another school in the region – Johannesskolan – the parents of the youngest pupils are calling for help. Here, the parents all point on the same problems: our six-year-old children are frequently experiencing being exposed to violence and sexual harassment from older Muslim students at the school.

‘We are afraid for our children’s safety. There are daily fights. My son was beat up twice in a day. He dared not tell anything to the teachers, since the other boys had threatened to kill him if he did. He wakes up with nightmares at night,’ says Sebastian Nasser, the father of a boy in the kindergarten class at Johannesskolan… 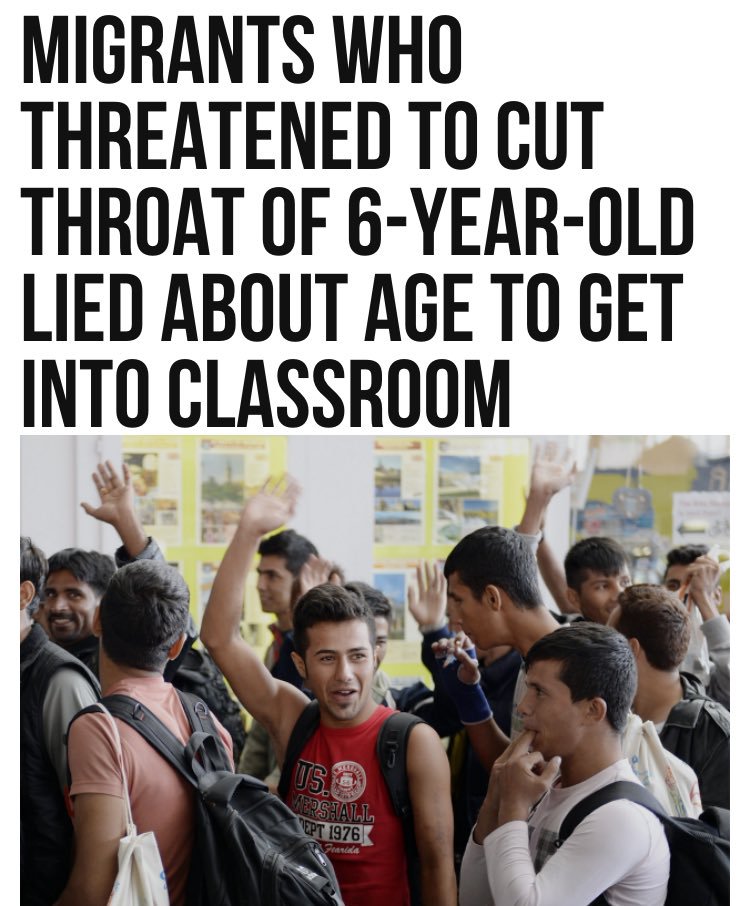 Other parents report that their daughters have experienced having their pants and panties pulled down by some of the school’s older Muslim pupils during breaks. Several parents have already moved their children to other schools because of the bad behavior. Teachers do also not feel safe at school. ‘I do not dare go down to the gym with students alone,’ expresses one of the teachers.”

Patrik Olsson have already moved his child from St. John’s School. … Another father at the school, who want to remain anonymous to protect his daughter, says she has been beaten at the school for several years. ‘Muslim boys threaten to rape her. They tell her that their fathers will fuck her. They call her a whore. They ask her what religion she has, the father says. They do not believe she is sufficiently Muslim.’

Two Swedish schoolboys have sent a letter to the principal, begging her to let them stay home from school after they and several other Swedish children were beaten, strangled, and tripped up by Muslim immigrant children. 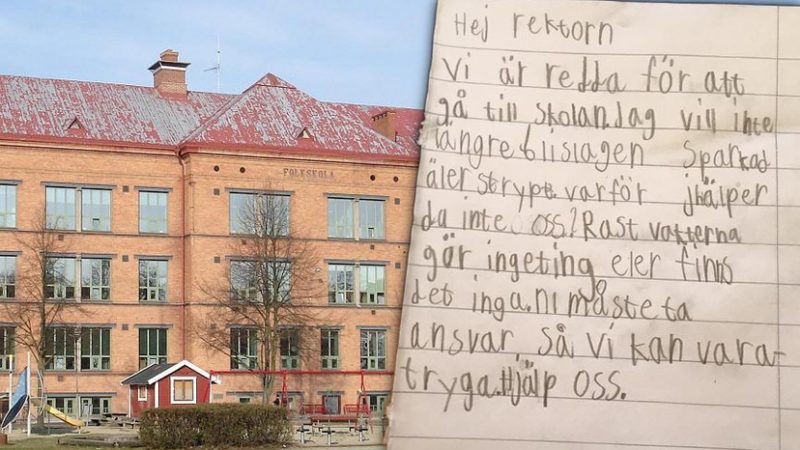 Steve Goode “My kids have been home since Wednesday, they have not felt safe and I have not wanted to force them there” said Malin, a mother to two boys who go to the school in Kristianstad.“When one of the boys said he did not want to play football because the Muslims cheat, two of them attacked him. It ended with this boy being completely covered in blood before some adults intervened.

At first, Annika Persson, the school’s principal took the side of the immigrant kids who were attacking Swedish kids, and she instructed the Swedish kids to “walk away” when there was trouble. 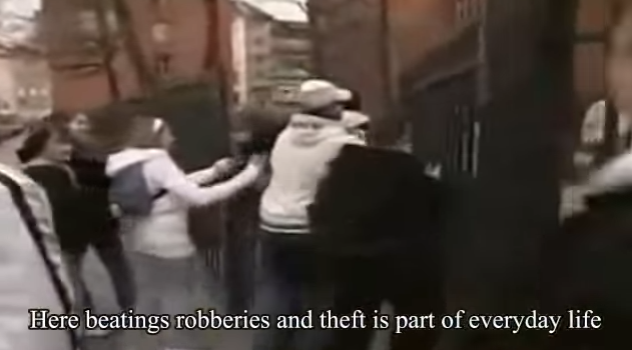 “The principal told us at the meeting that one must have an understanding for this, as they may have traumatic backgrounds” Madeleine said. “Then I asked the headmaster and wondered how to explain to my children that it is okay to become a little strangled or beaten, or they say go home and ‘fuck dad’s dick’, and to feel sorry for them because they come from war.

“Then she said to me; You will send your children on Monday! If you keep them at home, you will be breaking the law.”

A 9-year-old white girl was repeatedly beaten, sexually assaulted, and emotionally tormented by a group of migrant children at her school. However, instead of reporting it to the authorities, the school decided to cover up the sickening abuse. 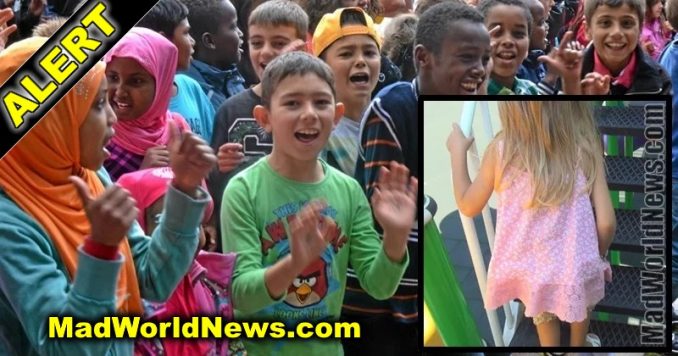 MadWorldNews The parents of the young girl demanded answers after their child revealed the horrors she was forced to face on a daily basis. The child explained that she was regularly called “pussy” and “whore,” and subjected to beatings on the school playground and bus. The final straw came when she shamefully divulged how some of the students had pulled her pants down in the cafeteria and proceeded to grind sexually against her while the other children watched.

When the parents confronted the school, they were shocked at the condescending response they received. Fria Tider reports: “We were told by a school staff that our daughter was blonde and sweet and she excited them. She had a mind of her own and it made it even more fun for them,” the mother told Swedish Television News Sörmland. “My daughter was standing with a tray in the dining room. Then, they pulled down her pants and humped her while everyone watched.” 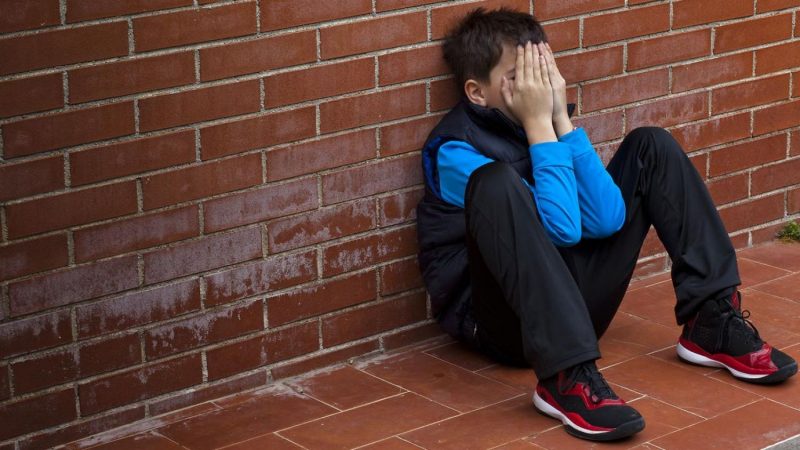 The school knew about the abuse and only offered to remedy it by driving her home, separate from the bus, when it became too severe for her to stand. Of course, this solved nothing.

Unfortunately, this behavior isn’t only happening in Sweden. This is occurring at the hands of migrant students in schools all over the world, including in a Canadian school where Muslim refugee children beat and choked children with chains.