LONDONISTAN: British woman complains to Metropolitan Police about Muslims illegally conducting group prayer in a public park. The police are unwilling to stop them, and the woman complains about there being one rule for Muslims and another for everyone else. Soon after, she is arrested. 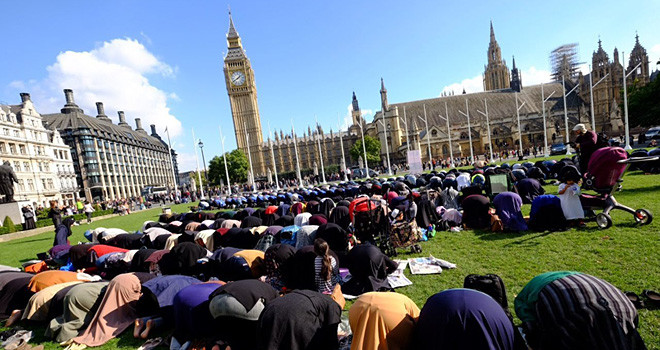 GatesofVienna  (h/t Marvin W) The context of the longer clip (second video below) is that large groups of Muslims have been publicly praying in a Royal Park in London, which violates the law. Apparently, Metropolitan Police deliberately refrain from enforcing that law, because it involves Muslims, probably because they didn’t want to deal with what happens when you piss off Muslims.

However, in this particular case, the police officers lied about the existence of the law. But when the woman read them the exact text of the law (below), they explain that they have orders from above not to enforce the law against Muslims.

The woman who recorded this footage obviously planned in advance for the encounter, and came prepared. And she’s a gutsy lady — at one point she’s surrounded by aggressive Muslims jabbing their fingers in her face and shouting at her. But she doesn’t back down or give in.

A few days later, we see the police at her apartment door, demanding to be let in, but not revealing why they wanted to talk to her. Finally, she lets them in and they arrest her.

Religious Activity in the Royal Parks

The Royal Parks (TRP) does not permit collective acts of worship or other religious observances in the TRP estate, either in their own right or as part of a demonstration, event or other activity. This includes spoken or sung communal prayers or other events that are primarily religious in focus. Exceptions are made for annual acts of remembrance at the regimental memorials in the Parks, which have taken place since the First World War.

As a public body, it is not the place of The Royal Parks to make value judgments between one religious observance and another. We must either permit all collective religious observances or refuse them all. Our approach is to continue to refuse all such observances on the grounds that they are not traditional park-related activities and the disadvantages to the public at large of allowing them would almost certainly outweigh the benefits to adherents of a particular religion or belief. The policy extends to the construction of structures within the estate with a religious significance.

Cultural events that do not include collective religious activity are permitted subject to the standard approval process.