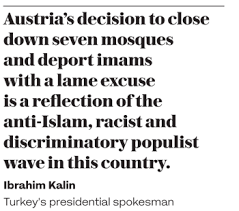 Even the Turkish president is making not-so-thinly veiled threats against the 31-year-old Austrian chancellor. Writes Recep Tayyip Erdogan to Kurz: “Your amateurish attitude (about Islam) could cost you dearly. You must know that closing a mosque in Austria and deporting religious men could start a new battle of the cross and the crescent, for which YOU will be responsible.”

Thankfully, the young anti-Islamization chancellor and his right wing coalition are making good on one of his major campaign promises: To stem the mass influx of Muslim invaders and freeloaders, while removing those Muslims and mosques that are deemed a threat to national security.