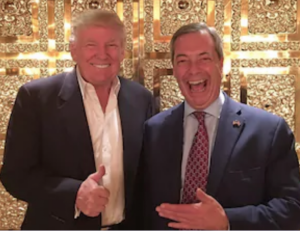 The Telegraph reports that the British government has set ‘a red line’ that forbids President Donald Trump from meeting with Nigel Farage, despite the fact the pair already have a great relationship that, presumably, could be beneficial for the UK.

A source close to Farage told Westmonster: “Downing Street’s actions have already set the special relationship into a downward spiral. They continue to shoot themselves in the foot again and again by not working with the few people in Britain that know President Trump well.”

It’s not the first time this government has missed an obvious open goal – it shunned the idea of Nigel being US Ambassador, despite Trump basically requesting it.