It’s a typical government letter which dances around the issue but doesn’t reveal how the Senator would actually vote on it. Schumer, in the past, has mentioned Muslim Brotherhood front group CAIR’s terrorism ties.

I understand your concern surrounding the Muslim Brotherhood in Egypt. (Apparently Schumer does not know that Egypt, under President El-Sisi, has banned the Muslim Brotherhood and either expelled, jailed, or executed its leaders as have several other Muslim countries) The Egyptian people have endured decades of suffering from violence and political unrest. Reports of the Muslim Brotherhood’s persecution of Coptic Christians in Egypt and other countries are especially troubling.

The killing of innocent people because of their nationality, race, religion or ethnicity is a deplorable act and those who perpetrate such violence must not be allowed to continue. I firmly believe that the United States cannot stand by while innocent people are denied their basic human rights.

Throughout my career, I have opposed violence and mass atrocities. During the 112th Congress, I was proud to support S.Res.44, which passed in the Senate by Unanimous Consent. The legislation supported democracy, universal rights, and the peaceful transition to a representative government in Egypt. The United States should be a global leader in promoting human rights around the world. I will not tolerate violators of human rights and will do all in my power to hold accountable perpetrators of such violence.

S.68 is currently being reviewed by the Senate Foreign Relations Committee. I will closely monitor its progress as it makes its way through the Senate.

Again, thank you for contacting me. Please keep in touch with your thoughts and opinions.

I wouldn’t hold out much hope that Schumer will vote in favor of this designation considering how he clouded up and boohooed over President Trump’s Muslim travel ban. 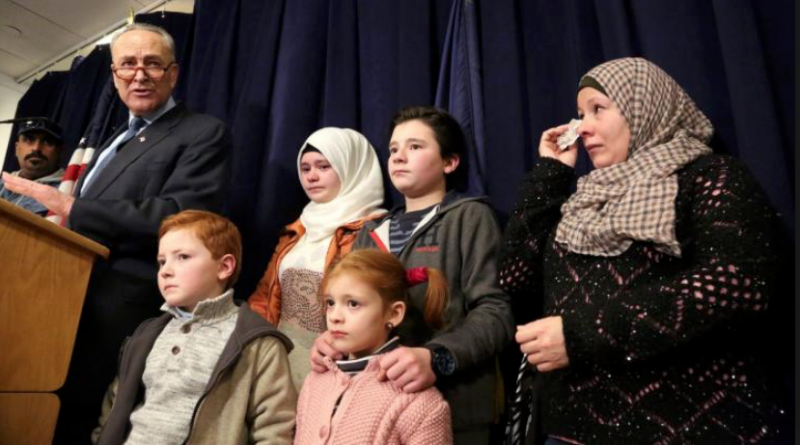 An Open Letter to Senator Chuck Schumer from US Defense Watch:

It was quite a weekend for you. When you weren’t wallowing in your 15 minutes of self-induced fame with endless tirades against President Trump and his executive order, you flooded the airwaves with enough Crocodile Tears to fill the Hudson.

If that wasn’t enough you posed with an Islamic version of the Walton family on Sunday — they looked like nothing more than props — to show us how we can teach the world to sing in peaceful harmony.

You referred to President Trump’s executive order, which indefinitely barred Syrian refugees from entering the United States, suspended all refugee admissions for 120 days and blocked citizens of seven Muslim-majority countries, refugees or otherwise, from entering the United States for 90 days: Iran, Iraq, Libya, Somalia, Sudan, Syria and Yemen, as mean-spirited and a moral outrage, yet they bear a resemblance to an executive order issued by President Obama in 2011 and orders issued by the Department of Homeland Security last year.

In 2011, President Obama placed a six-month ban on all refugees from Iraq after a refugee was linked to the deaths of US soldiers in Iraq.

The Secretary of Homeland Security has determined that Libya, Somalia, and Yemen be included as countries of concern, specifically for individuals who have traveled to these countries since March 1, 2011. DHS continues to consult with the Department of State and the Office of the Director of National Intelligence to develop further criteria to determine whether other countries would be added to this list.

Sure sounds like the same countries listed on President Trump’s executive order, doesn’t it, Senator?

Strangely, you, nor your colleagues in dishonesty and deception from the liberal media ever uttered so much as a peep about those orders signed by Mr. Obama and authorized by the DHS.

As you well know, Senator Schumer, the President’s first constitutional duty is to protect the nation from all enemies, foreign and domestic. It is not his duty to bow to the neurotic, loony whims of women on The View, naïve, airhead actors at an awards ceremony or the anarchists your party has unleashed once again in big cities across the country.

The examples of terrorists who have infiltrated into the US under the guise of the refugee or visa programs are numerous: Here are just a few:

On January 31, 2014, in the U.S. District Court for the Southern District of California, Ahmed Nasir Taalil Mohamud was sentenced to six years in prison for conspiracy to provide material support to a foreign terrorist organization. Mohamud was admitted to the United States as a refugee from Somalia.

On April 20, 2015, in the U.S. District Court for the District of Minnesota, Abdurahman Yasin Daud, a Somalian refugee was charged (along with six others) with conspiracy and attempt to provide material support to ISIS.

On February 18, 2015, Al-Hazmah Mohammed Jawad was arrested as he attempted to board a flight to Jordan to join and fight with ISIS in Iraq. Jawad was admitted to the United States in 2013 as an Iraqi refugee and he subsequently obtained a green card.

On January 29, 2013, in the U.S. District Court for the Western District of Kentucky, Mohanad Shareef Hammadi was sentenced to life in prison for a number of offenses related to terrorism. Hammadi is a native of Iraq who was admitted to the United States as a refugee in 2009.

In 2009, Ramadan Alwan, an al Qaeda-Iraq terrorist living as a refugee in Bowling Green, Kentucky — later admitted in court that they’d attacked U.S. soldiers in Iraq. An ABC News investigation of the flawed U.S. refugee screening system, which was overhauled two years ago, showed that the men were mistakenly allowed into the U.S. and resettled in the leafy southern town of Bowling Green, Kentucky.

You don’t know who these people are, or where they’re going, or what their motivations are, do you Senator Schumer? How is the government supposed to scrutinize the backgrounds of refugees, when laws prohibit officials from examining the social media pages of those who wish to settle in the USA?

You do know one thing though, Senator Schumer; they will eventually vote Democrat and that’s all that counts, national security be damned.

Mean spirited is a Jihadi firing a couple hundred rounds into innocent men and women in a crowded Paris theater.

Moral outrage is an Al-Qaeda operative roaming freely around the US, with a shiny new green card and a carload of C4.

Mean-spirited is a Jihadi driving over people with a semi-truck in downtown Nice.

Mean spirited are the constant threats by Iran against the United States.

NO ONE has a constitutional right to be here that is not an American citizen. Those who come here do so at the discretion of the President and the Congress, which represents we the people. You might want to explain that to your shrieking, naïve, delusional fellow Democrats, Senator Schumer.

The President of the United States is the leader of this nation. Like all leaders, he must make decisions that are sometimes unpopular among certain groups, for the greater good of America. Strength is a trait that has all but vanished among liberals and national security is anathema to the left’s obscene world view. It is more than obvious that Democrats are willing to gamble with the lives of the American people in order to be politically correct.

Your actions this weekend, Senator Schumer, have clearly demonstrated once again that the simplest equation in the world is LIBERALISM = ABSOLUTE WEAKNESS.

Editor in Chief, US Defense Watch