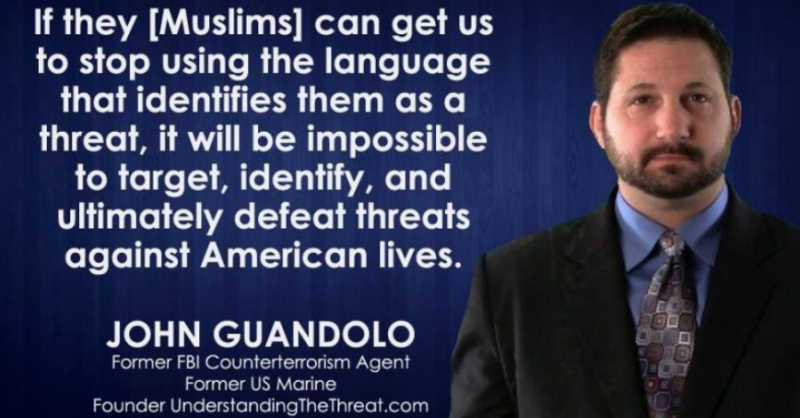 John Guandolo, who offers training to law enforcement agencies around the country through his organization ‘Understanding The Threat,’ recounted during his radio program on Monday a conversation that he says he had recently with an unnamed influential conservative activist who was concerned about a Muslim candidate who was running for state office as a Republican.

Guandolo told this activist that he was right to be concerned because “this is a common thing that the Islamic movement is doing. Jihadis portray themselves as conservative Republicans; they’ve been doing it for years and it gets them into the Republican Party.”

Guandolo said that even Muslim candidates who openly denounce the Muslim Brotherhood and Islamic terrorism cannot be trusted or believed, which is why Muslims should be banned from running for office entirely.

Islam itself is utterly incompatible with American law and with our founding principles of liberty, because Sharia is about slavery,” Guandolo said. “But we are not in a position to say that a Muslim can’t run for office. Now, the reality is they believe in a belief structure which calls for the overthrow of the government, so they can’t serve—but we’re simply not there yet.”

CLICK below to hear all of what Guandolo said: