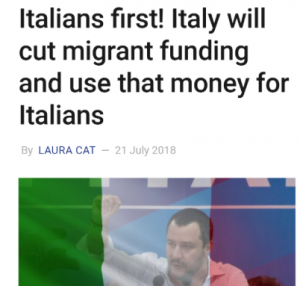 In this video, Interior Minister in charge of immigration, Matteo Salvini, shocks Muslims by telling them that before he allows a place of Islamic worship to be built in Italy, he wants 24/7 monitoring of it, enhanced screening of any clerics leading prayers there, and detailed information on who is financing it and where the money is coming from. Without these conditions, he says he “will not give them even a half square meter of space for it.”

Salvini has been the driving force behind stopping all the NGO-enabling human trafficking boats from docking in Italy and has plans to begin deportation of some 500,000 illegal alien Muslim invaders already there.

MATTEO SALVINI is the most popular man in Italy right now