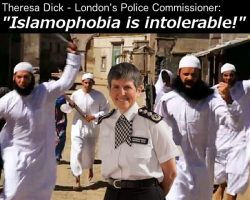 So afraid to hurt the ‘sensibilities’ of Muslim terrorists and the ordinary Muslims who secretly admire them, Britain’s top police officer Cressida Dick is taken over the coals by London Assembly member Peter Whittle for her “mealy-mouthed” description of Islamic terrorists as “so-called Islamist-inspired.”

Breitbart  Mr Whittle used this intervention as a launchpad to question the use of terminology by the establishment and, in particular, Commissioner Dick herself, asking: “You’re talking about ‘right-wing’ groups… ‘extreme right-wing’, you have no problem saying that — but then you go on to say ‘so-called Islamist-inspired’. Why are you mealy-mouthed?”

The Metropolitan Police chief, flustered, attempted to justfy herself in terms of mollifying certain groups: “I think as a senior police officer it’s important for me not to randomly upset people (Muslims) who might get upset,” she said — not quite able to bring herself to say who these people may be. 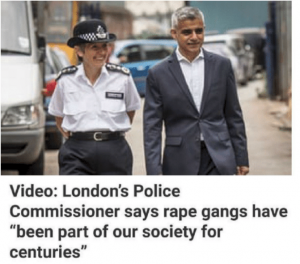 It is not the first time the famously politically correct Metropolitan Police chief has clashed with Mr Whittle in the London Assembly, having previously attempted to deny the Muslim child grooming and rape gangs being exposed up and down the country had any significant racial or religious dimension, and claim they had “been part of our society for probably centuries and centuries and centuries”.