A video that has outraged Greek citizens was released from the Moria refugee camp on the island of Lesbos, Greece. It shows angry Muslim migrant wannabes throwing away meals in the street because they don’t like the food and the free accommodations. 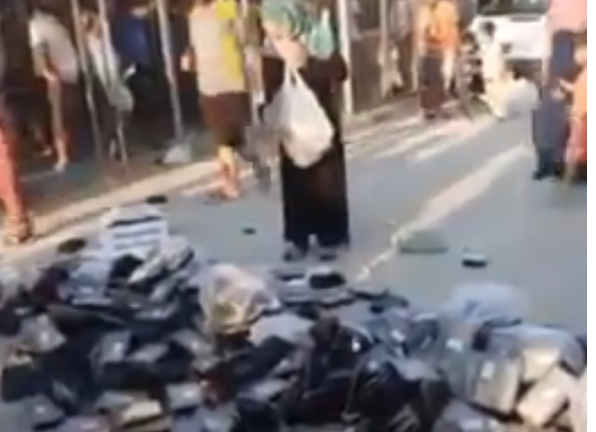 Voice of Europe  (h/t Maurice) According to Greek news portal News One, the throwing of food was a way for the camp’s residents to protest against their living conditions. For the Greek people it’s very controversial, as currently, many Greeks cannot afford to satisfy even their basic needs like food and a home.

“The local community is tired from this prolonged unresolved issue and also have lost their faith in what the central administration and the European Union have promised but not delivered,” Lesbos mayor Spyros Galinos said.

In May he said that on the island, “women are afraid to go out of their homes, we keep our children in our houses” as the island is exhausted from the ongoing dangerous situation with migrants.

BUT THAT’S NOT ALL. In July of 2017, illegal alien Muslim invaders set fire to their own migrant camp on the island of Lesbos. Apparently, many were angry at having their requests for asylum rejected. So they did what Muslims do when they don’t get their way.

They did the same thing to another refugee camp in Lesbos back in Oct. 2016. The Muslim freeloaders, mainly from Pakistan and Bangladesh (neither of which is a war-torn country), are upset over delays in processing their asylum claims, so they set fire to facilities used by the European Asylum Support Office (EASO).

EuroNews About 70 Muslim illegal aliens threw rocks and burning blankets at containers inside the Moria camp, damaging a number of them. A spokesman for EASO said protesters had hurled petrol bombs while interviews with Muslim asylum-seekers were taking place. Riots break out all the time among Muslim illegal asylum seekers with more than 15,000 of them being housed in overcrowded camps on Greek islands.

Greece is a popular gateway for African Muslim illegal aliens trying to reach the welfare havens of Western Europe. While they await travel papers and free transportation north, they are creating havoc and chaos in the island detention camps of Kos, Lesbos, Samos, and Chios, and wreaking fear among residents of the surrounding neighborhoods in which they are being housed.

“They treat us like animals,” complain the illegal alien Muslim invaders squatting on the island of Lesbos in Greece.

al-Jazeera At least 3,000 Muslim invaders posing as refugees are living in Moria, a hilltop former military base where they claim the living conditions are not acceptable as they await, for months, word on their future.  The United Nations refugee agency and other international organizations are demanding that Greece improve conditions at its overcrowded facilities.