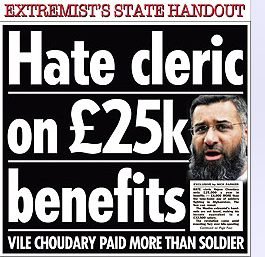 …the British government is planning to give him and his family a taxpayer-funded free safe house upon release, not to mention more of the kind of  generous welfare benefits he lived on for many years prior to his imprisonment. Even though Choudary is a licensed attorney, he doesn’t want to work and feels entitled to live off the state, which he has dubbed “Jihad Seekers Allowance.” 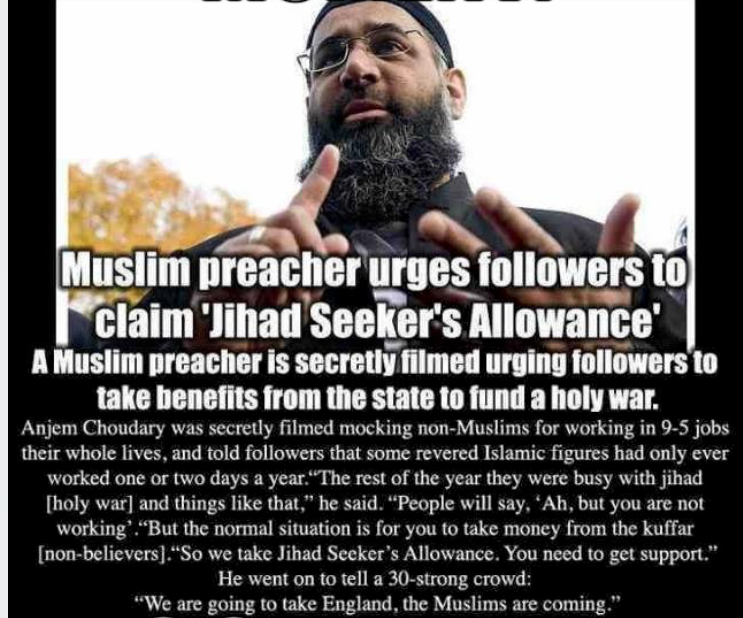 The Rebel  Since 2016 Choudary has been serving his five-year sentence in prison.  But, this avowed jihadist is due to be released in October of 2018 –after just two and a half years inside. Prisons Minister Rory Stewart has warned that Choudary is still a threat, and remains a ‘deeply pernicious, destabilising influence’.

Anjem Choudary is one of the greatest monsters in the UK that the government has allowed to roam its streets, putting people in danger and radicalizing Muslim followers who have committed terrible atrocities. He’s a former attorney and spokesman for the banned terrorist organization, Islam4UK.

CHOUDARY’s terrorist-supporting, extremist Islamic group reappeared under many different names – from Al Muhajiroun to Muslims Against Crusades. Choudary was a key figure in the recruitment of fighters for Osama Bin Laden in Chechnya, Afghanistan and Pakistan.

Choudary loudly calls for the implementation of Sharia and has predicted that Muslims will control Britain within a matter of decades.

He’s called for a parallel system of Islamic education in the UK and has been accused of training extremists with handguns, rifles and mock rocket launchers on Islamic-themed camping trips.

He calls the 9/11 terrorists ‘magnificent martyrs’ and refused to condemn the 2005 bombings in London. He blamed the murder of Lee Rigby on British foreign policy – and Rigby’s killer Michael Adebolajo was one of his disciples.

Choudary’s associates have been connected to at least 15 major terrorist attacks and plots with experts suggesting as many as 500 of his disciples are now fighting for ISIS.

And it isn’t just Anjem Choudary being released from prison. There are dozens of other Islamic jihadists on their way out, too! One of them is Mizanur Rahman, 35, an acolyte of Choudary’s and a computer whiz known for creating secret internet forums for Al-Muhajiroun, the banned Islamic extremist organization.