The man appears to have set his car on fire and stabbed a number of people this afternoon before being shot by police. Police say the exact circumstances have not yet been determined but Counter-terrorism police are investigating. 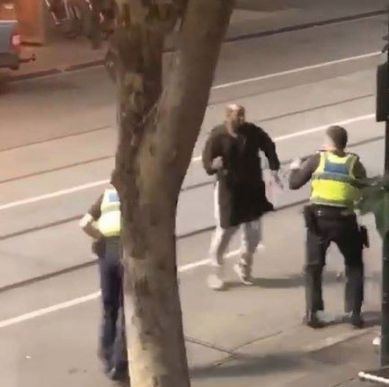 UPDATE: Police believe a deadly stabbing spree in Melbourne by a Somali-born Australian man was an act of terrorism, possibly designed to explode a vehicle filled with gas cylinders in the city centre during rush hour. Islamic State (ISIS) has claimed responsibility for the attack.

The man was named by Melbourne’s Herald Sun as Mohamed Khalif, 31, whose 21-year-old brother was accused of plotting a mass murder on New Year’s Eve at Federation Square last year, a city centre hub and popular tourist spot.

In an attack described by the state premier as an “act of evil”, the man sped a utility vehicle down Bourke Street, one of the city’s busiest thoroughfares, and then stopped and apparently set it alight before randomly stabbing pedestrians. One person was killed and two, aged 26 and 58, were injured. 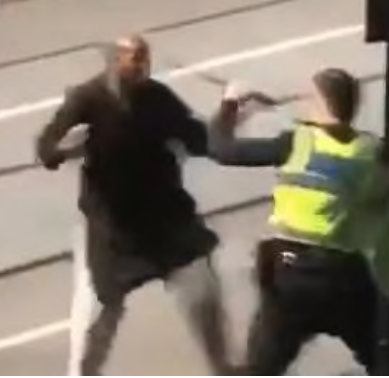 AU News Video below has emerged of a man lunging at police with what appears to be a knife before being shot in Melbourne’s Bourke St.

In a statement Victoria Police said a man was arrested at the scene and has been taken to hospital in critical condition. He is under police guard.

“A small number of people are being treated for stab wounds,” the statement said. Ambulance Victoria said it assessed three people at the scene and one person was taken to hospital with neck injury, they are in a suspected critical condition.

Melbourne resident Meegan May told news.com.au she was on a tram on Bourke St heading into the city when it stopped just before Elizabeth St about a block before the mall. She heard someone start screaming “he’s got a knife”.

She looked through the back window of the tram and noticed a car on fire. There was a man and two police officers trying to calm him down. “A moment later, I heard a loud bang, to me it sounded like a gunshot,” she said.