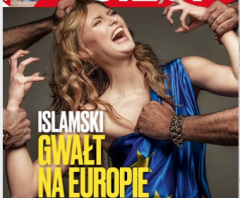 Would it surprise you to learn that European women are being blamed for getting raped by Muslim migrant men? Such is the latest position – the latest apologia – being offered by those dedicated to exonerating undesirable Muslim behavior, particularly in the context of accepting more Muslim migrants into the West. Apparently, the “ME, TOO” movement need not apply when women are the victims of Muslim migrant rapists in Europe.

Raymond Ibrahim  These are hardly the first times officials “put the blame for the criminal acts [of Muslim men] on the women.” Nor is this phenomenon limited to Germany and Sweden. For instance, after a 20-year-old Austrian woman waiting at a bus stop in Vienna was attacked, beaten, and robbed by four Muslim men – including one who “started [by] putting his hands through my hair and made it clear that in his cultural background there were hardly any blonde women” – police responded by telling the victim to dye her hair.

Likewise, Unni Wikan, a female professor of social anthropology at the University of Oslo in Norway, insists that “‘Norwegian women must take their share of responsibility for these rapes,’ because Muslim men found their manner of dress provocative. The professor’s conclusion was not that Muslim men living in the West needed to adjust to Western norms, but the exact opposite: ‘Norwegian women must realize that we live in a Multicultural society and adapt themselves to it.’” 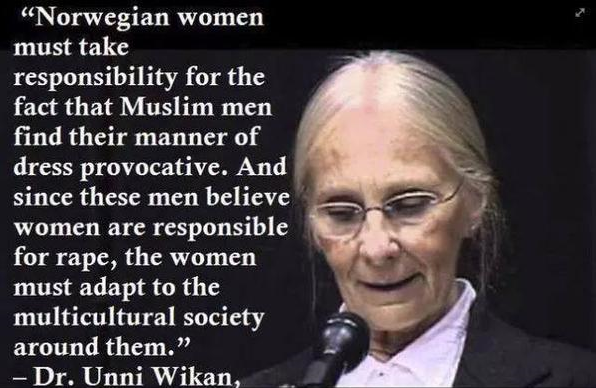 So much for the feminist claim that women are free to dress and behave as promiscuously and provocatively as they want – and woe to any man who dares cite this as justifying his sexual aggression. Apparently, this feminist refrain does not apply to Muslim men.

But perhaps the greater irony of all these excuses is that, from the very start of Islam 14 centuries ago, European women – even chaste nuns – have always been portrayed by Muslims as sexually promiscuous by nature.

This is easily discerned by examining medieval Muslim perceptions – and subsequent treatment – of European women, as documented throughout Sword and Scimitar: Fourteen Centuries of War between Islam and the West . Consider Muslim views concerning neighboring Byzantine women, who came to represent all European or Christian women to Islam.

As one Western academic of Muslim origin (rather euphemistically) explains:

The Byzantines as a people were considered fine examples of physical beauty, and youthful slaves and slave-girls of Byzantine origins were highly valued. … The Arabs’ appreciation of the Byzantine female has a long history indeed. For the Islamic period, the earliest literary evidence we have is a hadith (saying of the Prophet). Muhammad is said to have addressed a newly converted Arab: “Would you like the girls of Banu al-Asfar [the yellow (haired?) or pale people]?”

Muhammad’s question was meant to entice the man to join the Tabuk campaign against the Romans and reap its rewards – in this case, the sexual enslavement of attractive women. In other words, as “white-complexioned blondes, with straight hair and blue eyes,” to quote another academic, Byzantine women were not so much “appreciated” or “highly valued” as they were lusted after. (All quotes in this article are sourced from and documented in Sword and Scimitar.)

Clearly, little has changed some 1,400 years after the founding of Islam: European women continue to be seen as naturally promiscuous and thus provoking Muslim men into raping them. 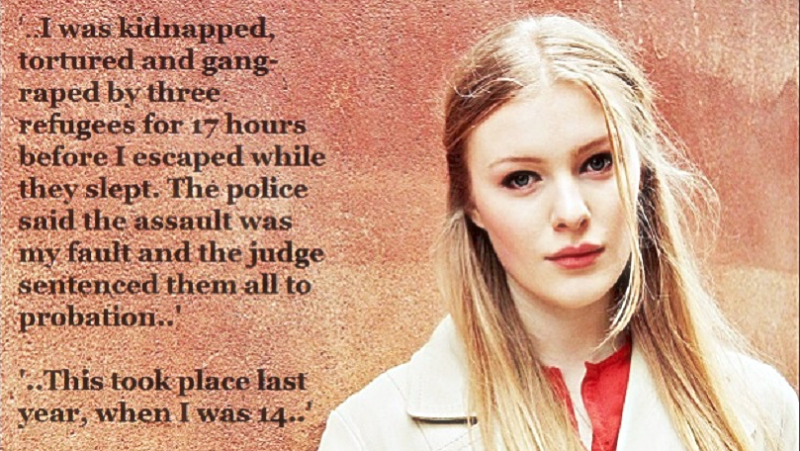 Thus, in the United Kingdom, a Muslim man explained to a British woman why he was raping her: “you white women are good at it.” Another Muslim man called a 13-year-old virgin “a little white slag” – British slang for “loose, promiscuous woman” – before raping her.

In Germany, a group of Muslim “refugees” stalked a 25-year-old woman, hurled “filthy” insults at her, and taunted her for sex. They too explained their logic to her – “German girls are just there for sex” – before reaching into her blouse and groping her. A Muslim man who almost killed his 25-year-old German victim while raping her – and shouting “Allah!” – asked afterward if she enjoyed it. 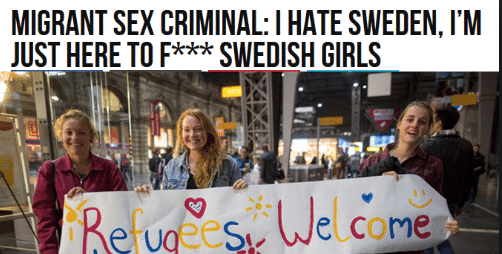 In Austria, an “Arabic-looking man” approached a 27-year-old woman at a bus stop, pulled down his pants, and “all he could say was sex, sex, sex,” prompting the woman to scream and flee.

In Australia, a Muslim cabbie groped and insulted his female passengers, including by saying, “All Australian women are sluts and deserve to be raped.”

In short, the ancient Islamic motif concerning the alleged promiscuity of European women is alive and well – irrespective of the latter’s behavior – and continues justifying the Muslim rape of Western women.

Yet, even in this, Islam can turn to those “progressive,” godless elements that dominate Western society for cover. For, just as “the Left” has worked long and hard to portray Islamic intolerance, violence, and terrorism as the West’s fault – because of the crusades, because of colonialism, because of cartoons, because of Israel, because of freedom of speech – it now adds “because of Western promiscuity” to the list of reasons that “provoke” Muslims to behave like Muslims. 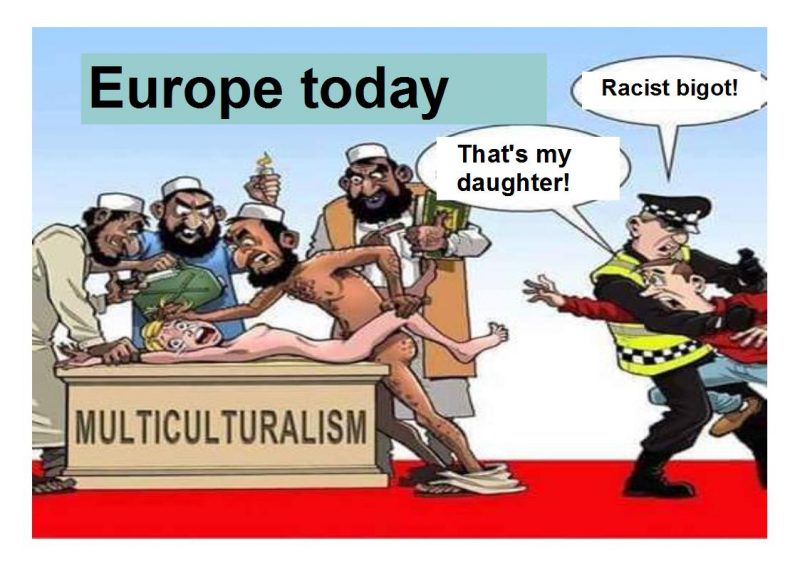 The man, a Libyan national according to court documents seen by The Local, is suspected of a sexual attack on a ten-year-old girl in Malmö last week.

The child was cycling home from school at around 5.30pm on Thursday when the man is said to have approached her and then attacked her in a bicycle shed attached to an apartment block. The man confessed to the allegations. The court remanded him in custody and ordered him to undergo a minor psychiatric evaluation.

According to previous charges he is also suspected of exposing himself to a woman in her 50s in August and asking to buy sex, and of having touched a 14-year-old girl’s bottom in the northern city Skellefteå.

Swedish independent journalist Joakim Lamotte has talked to a mother whose 11-year-old daughter was raped by two men.

The mother has just been informed that the investigation has been closed, and that her daughter will not be redressed.

Another day in Sweden, another gang rape: Woman raped in playground by African Muslims

A 25-year-old woman has been gang raped by Africans in a playground in central Stockholm.

The arrest warrants show that the men are 18, 20 and 29 years old. Two are citizens of Somalia and the third in Eritrea. One of them needs interpreting in Somali and another in Arabic. Which means that they most likely are newly arrived migrants.

One of them is also suspected of a rape that took place in February. After the gang rape, they robbed the woman of her belongings, for which they were also arrested. Two of them are previously convicted. The 18-year-old has committed assaults and drug offences. The 20-year-old is convicted of several cases of theft and drug offences. 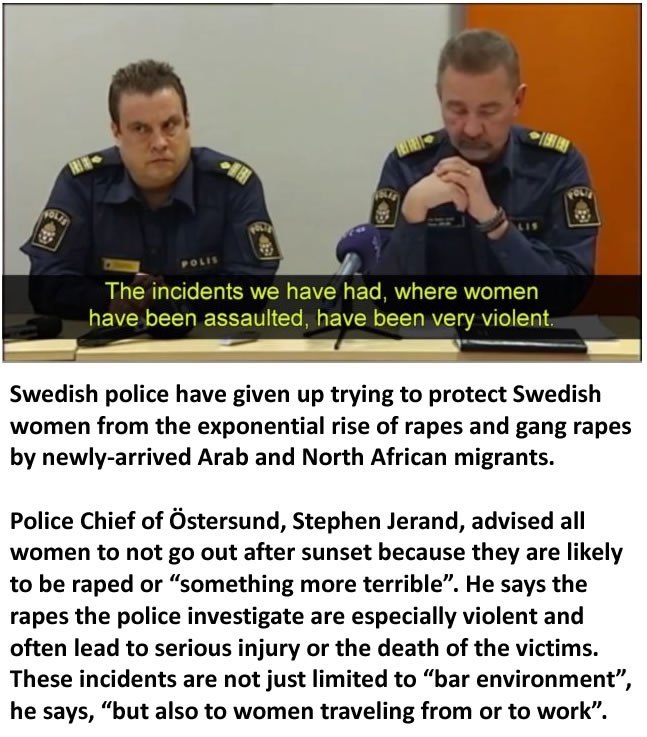 According to Bild the men aged between 20 and 25 preyed on the ‘socially challenged’ girl after she was groomed by one of their number.

She is said to have told officers that one man repeatedly raped her and that she had been assaulted by five of his friends last month. The attacks were spread out across several apartments in Munich.

News of the assault comes as Angela Merkel’s Germany reels from the horrific story of seven Syrian migrants gang-raping an 18-year-old girl on October 14.

On October 14, seven Muslim migrants raped a teenage German girl in a park, after drugging her at a disco

At least she survived; in a similar case that occurred a week earlier in Italy, the drugged rape victim was left murdered.  Bernhard Rotzinger, the police chief of Freiburg, responded by saying, “We cannot offer citizens an all-risk insurance [against crime], but I can advise this: Don’t make yourself vulnerable by using alcohol or drugs.” 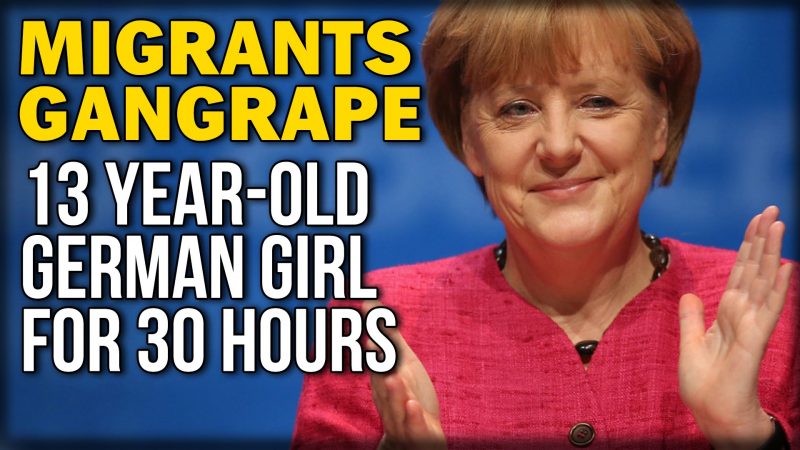 Feminists responded to the sickening gang rape and murder of a 16-year-old Italian girl by three illegal African migrants by protesting against all men.

Earlier this month, the body of Desirée Mariottini was found in a derelict building in Rome notorious for drug trafficking. The girl was fed a cocktail of drugs and sexually abused before she died. Three Muslim migrants from Senegal and Nigeria were subsequently arrested by police.

Feminist group NonUnaDiMeno (Not One Less) claimed that the murder highlighted the problem of “patriarchal violence” while blasting Interior Minister Matteo Salvini as ‘racist’ for making the issue about immigration. 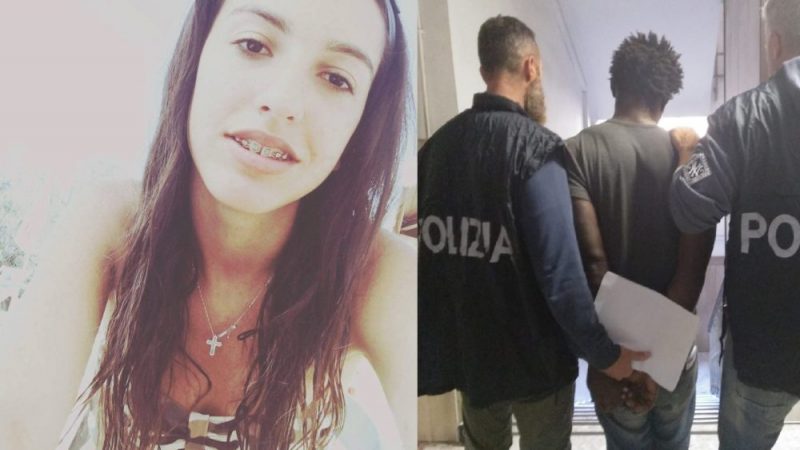 On Oct. 27th, a 10-year-old girl was raped in Malmö. The police have a depiction of the suspect, but won’t reveal any details, Sydsvenskan writes. At 5.30 pm on Thursday a rape took place in a courtyard in Malmö. According to the police, an adult approached a 10-year-old girl.

The police have a depiction of the suspect but won’t release any details. We want unaffected testimonials and therefore won’t go into details, says Mats Attin.

Initially, the police didn’t want to reveal the suspected crime classification, but district prosecutor Charlotte Ottosen announced later on Friday that it was rape of a child. 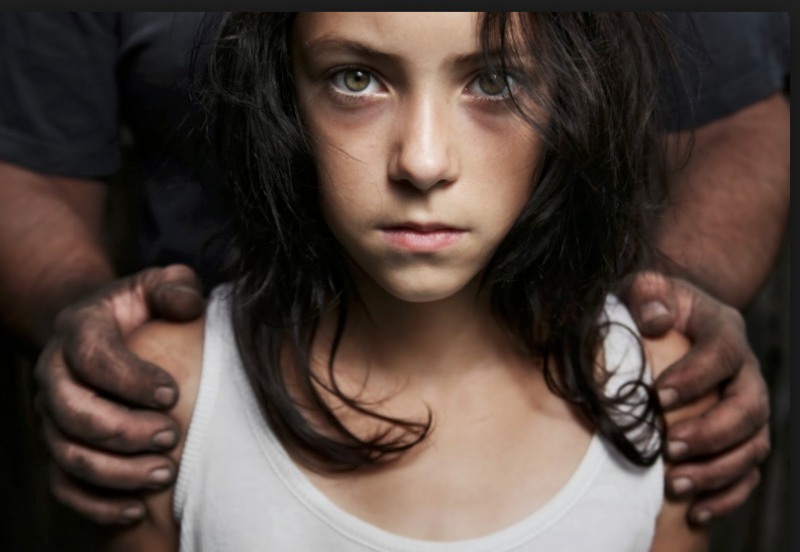 27 police forces have been investigating no fewer than 54 alleged gangs involved in child sexual grooming. On September 15, 2018, what was described as “the most serious example of sex grooming yet to emerge in this country” was made public.

The case involved a girl, Sarah, who was abducted by a Muslim gang when 15, held in captivity for twelve years, forced twice into marriage, repeatedly raped, beaten, and made to endure eight abortions. As in other cases, her family’s pleas for help were ignored by the police to whom they had turned.

One justification used for the UK grooming cases is that the girls involved are non-Muslims who may, as supposed inferiors, be attacked with impunity. Many victims of foreign rapists report that they have kept repeating that rape is permitted in the Quran.

In addition, a female professor from al-Azhar, has claimed that Allah allows “Muslims to rape non-Muslim women to ‘humiliate’ them.” 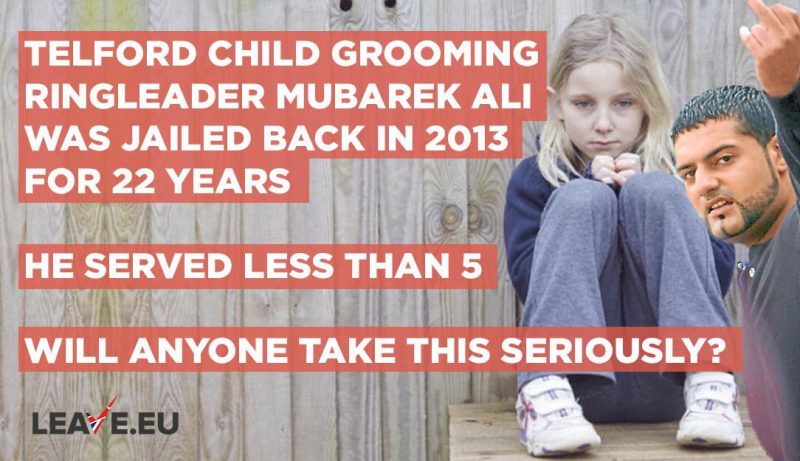