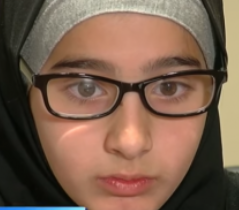 An Iraqi Muslim student at Millcreek Elementary named Maram Al-Shammari (right), claims she was praying during recess and a “bully” came over and pulled off her Islamic supremacist headgear. She says “My fourth grade teacher took sides. She took sides quickly and she took sides with the bully.”

Granite School District spokesman Ben Horsley  said, “This student, who was the perpetrator, is also a Muslim refugee so really literally it was really clear there was no indication that this was any sort of religious harassment.” Horsley said the young boy was disciplined.

To make sure this issue doesn’t continue in Utah public schools, Refugee Justice League advocate Mckell Withers has written a letter to superintendents across the state, encouraging them to adopt religious clothing guidelines. You can read a sample of the letter sent to Utah superintendents here.

Shockingly, CAIR is not yet involved in this, But they will be.