Meghan Markel has taken the Royal Family’s well-known soft spot for Muslims to new heights by frequenting a mosque with deep ties to multiple Islamic jihadis, including ISIS executioners. A Muslim community kitchen backed by Markle has been linked to 19 extremists connected to “terrorist acts.”

The Sun  (h/t Maurice) The Duchess visited the Al Manaar Hubb Community Kitchen in a West London mosque after helping them write a cookbook in the wake of the Grenfell blaze.

The anti-extremism think tank, Henry Jackson Society (HJS), links the hub to 19 jihadis, including Jihadi John, the Telegraph reports. The mosque is run by Imam Samer Darwish, who preached on YouTube that girls who listen to music may become strippers.

It is also linked to Jihadi John, who became the face of ISIS’ depraved campaign of terror.

He has also said on the Islam Channel that women should not pray while on their period or cry when visiting graves. Meghan, 37, made secret visits to the Westbourne Grove centre.

But the Imam’s hardline preaching is likely to shock the Duchess, a passionate feminist campaigner. The Royal visited the newly-renovated kitchen to help cook 200 meals for the local community.

She beamed during the “secret” visit – which was not publicised beforehand. Their cookbook, Together, has raised £210,000 for the community after Meghan wrote the foreword.

HJS says the four Jihadi Beatles attended the mosque before they were charged with murdering and torturing hostages in Syria.

In a Youtube clip Darwish says: “Bleeding, no praying. Stop bleeding, just pray. I’ve seen some of our sisters holding Koran using glove, which is a good idea.” 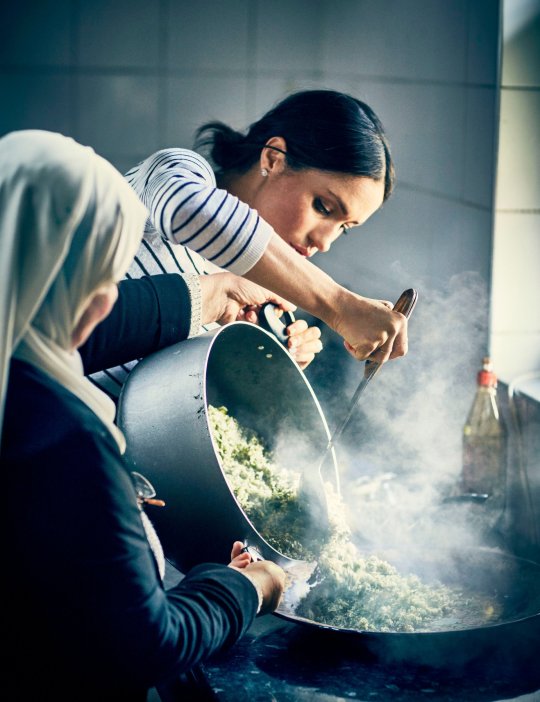 In another he preaches: “Those who are uncovering up some parts of their body and you will have no control in your daughter.”

On women visiting graves, he says: “There is no harm but she will not cry to the extent to the point that she start screaming and stuff.”

Dr Alan Mendoza, executive director of the HJS, said the Duchess of Sussex had been “poorly advised” over her involvement with the mosque. “This is not one or two isolated cases but 19 separate individuals.

A simple Google search would have highlighted concerns over these connections, and the recently expressed views of Imam Darwish.”

A Kensington Palace source said the “Hubb” is an independent project that leases space from Al Manaar, adding: “The project is empowering the women and helping provide some hope and joy to a community that has gone through unspeakable tragedy.”