It is NOT a phobia but a rational fear/loathing of an ideology behind virtually every terrorist attack in the UK, as well as gang rapes and sex grooming gangs, not to mention wanting sharia law to replace British law (see last video).

The Guardian  Muslim organizations are urging Theresa May, Jeremy Corbyn and all other party leaders to adopt a newly proposed working definition of Islamophobia in an attempt to put pressure on a reluctant Home Office to follow suit.

From this 2015 official report, here are the guidelines that the London Metropolitan Police use to determine if someone is “Islamophobic.” That is astonishing. They’re criminalizing negative opinions about a particular religion. Why do the London Metropolitan police reserve the right to decide whether or not people’s opinions of Islam are based on hatred? 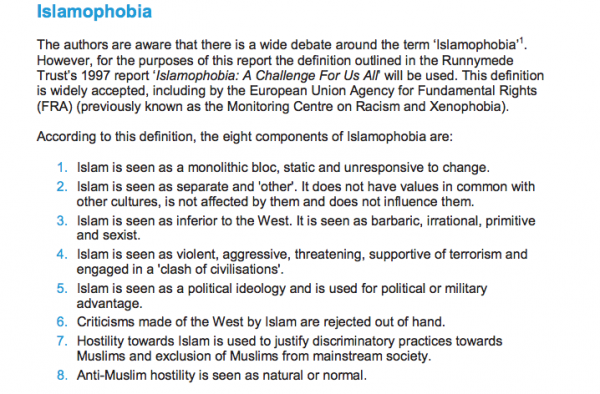 The definition was set out in a report published by a cross-party group of MPs last week and says: “Islamophobia is rooted in racism and is a type of racism that targets expressions of Muslimness or perceived Muslimness.” (That still  does not make anti-Islam sentiment “racism.”

Funny how nobody wants to recognize that anti-Islam backlash seems to spike every time there is a Muslim terrorist attack in the UK or around the world.

Professor Salman Sayyid of Leeds University and AbdoolKarim Vakil of King’s College London say “Opposition to the term Islamophobia or to attempts at its definition is nothing new. Islamophobia is racism; naming and combating Islamophobia is not about special pleading, it’s about civil rights.”

Harun Khan, secretary general of the Muslim Council of Britain, said his and other groups hoped political leaders would “all understand the importance of listening to communities” and make a “positive response” by adopting the definition.

However, a Home Office minister said earlier that the department had no intention of adopting a definition, in response to a question from one of the chairs of the cross-party group, the Conservative MP Anna Soubry.

Victoria Atkins told the Commons in March that there were “many definitions of Islamophobia”, but added: “We do not accept the need for a definitive definition, but we know that Islamophobia is clearly recognised and that we have very effective monitoring systems of all race-hate crimes.”

The inquiry by the all-party parliamentary group on British Muslims held sessions in Manchester, London, Birmingham and Sheffield. Members heard about a wide spectrum of Islamophobic experiences, including multiple incidents of physical and verbal abuse.

In the below video at around 01:25, they show a 16-year-old girl being slammed to the ground by a man on a train platform,, but don’t mention that the man appears to have a Muslim beard.

A Muslim woman described how a lit firework was posted through her letterbox in her home in Wales; a student in Sheffield was abused on public transport and “no one intervened to stop it”. Victims described the impact on their mental health of their experiences, which often left them feeling isolated.

A newly launched website in support of the definition includes the example of a Muslim mother who was allegedly attacked by three women “for wearing a headscarf” as she walked to a primary school in south London.

The plea for politicians to adopt the definition comes after a bruising summer dominated by rows about Islamophobia among the Conservatives, following a particularly controversial newspaper column written by the former foreign secretary, Boris Johnson, in which he compared fully veiled women to letterboxes and bank robbers.