Originating from Chechnya, the same region that gave us the Boston Marathon bombing Tsarnaev brothers, an 11-year-old Muslim terrorist-in-training and his brother never got to fulfill his ‘beheading’ dream because they were shot dead after ramming a car into police.

Daily Mail  In the video, Mukhamad-Amin Akhmatkhanov brandished a knife as he said he had been created ‘in order to lift up high the banner of Allah…with the help of blood.’ But he and his 17-year-old brother Elakh were shot dead by police a short time later having rammed a Mercedes into police in the capital Grozny.

Dramatic CCTV footage shows an explosion as the car, driven by Elakh Akhmatkhanov raced towards a busy intersection. It then sped around a corner -hitting and killing a policeman – and crashed into a police vehicle injuring three others including a woman.

Their blood-drenched bodies were later seen on the road being examined by police.

The attack was in August but the video – highlighting the sickening use of children by ISIS – has only now emerged in Russia. In the footage, the boy is asked questions by an unseen man making the film.

Mukhamad replies: ‘Allah created me in order to lift up high the banner of Allah…with the help of blood.’ He claims the ‘law of Allah’ no longer holds sway in his homeland and ‘they are killing my brothers and sisters…’

He vowed: ‘As soon as we get to you, we will cut off your heads, and they will fly away…’ The car attack instantly killed the policeman. A bomb device – controlled by the 11-year-old – exploded sooner than expected in the car, but did not kill the brothers. They died from police shots, say reports.

CCTV footage shows an explosion as the car, driven by Elakh Akhmatkhanov raced towards a busy intersection

This was one of a series of attacks staged by male Muslim cousins aged from 11 to 18 on August 20. A family member later said the boys has been radicalized by ISIS.

Other attacks the same day involved an alleged suicide bomber, a policeman killed by firearms, and another checkpoint attack. 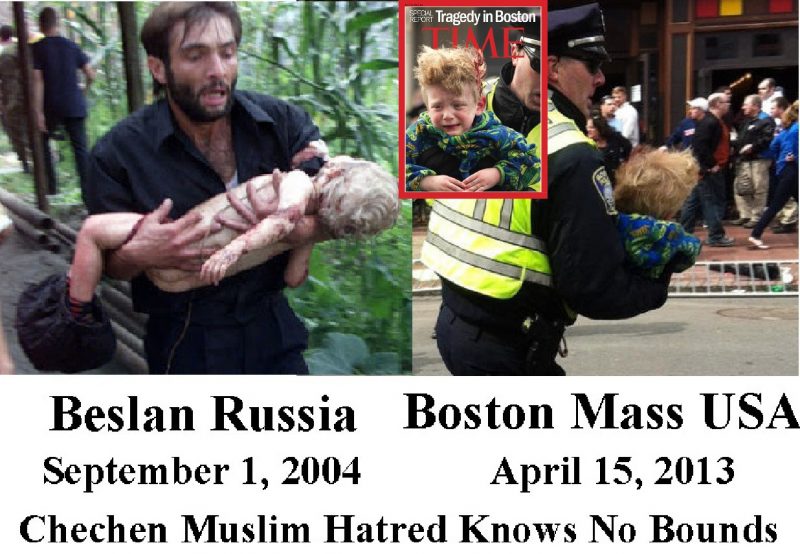