Allasheed Allah, 54 (below), from Manhattan’s East Harlem was arrested and charged with assault as a hate crime and aggravated harassment against 20-year-old Indian-American Avneet Kaur on a Subway train. 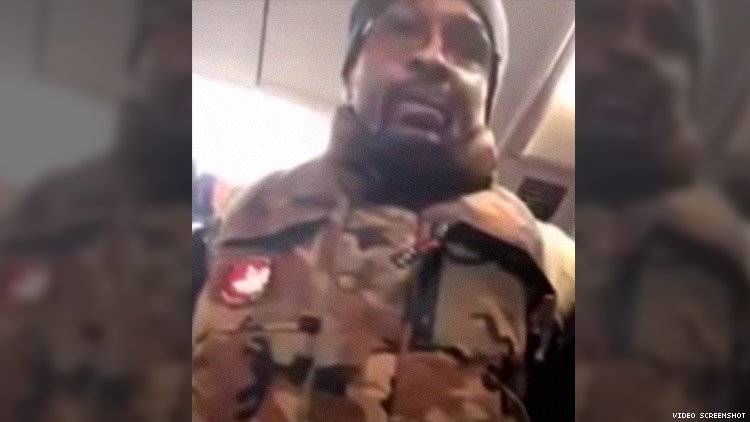 NY Daily News  While Kaur and her friend were riding a Manhattan-bound E train through Queens during evening rush hour, the victim said her friend “gave me a kiss on the cheek while she was making a Snapchat.” “That’s when the guy across from us (Allah) started screaming homophobic slurs at us … I guess the kiss triggered him,” recounted the woman.

Though the peck was platonic, Allasheed Allah flew into a rage at the sight. The hulking homophobe then threatened the pair: “Don’t do that gay shit in front of me and called her a dyke. Do that one more time and watch what happens!” When the two students stood to find new seats, the screaming Muslim sprang to his feet and bum-rushed them from behind.

“I knew he was going to hit me,” said the victim. “He punched me in the back. I turned around and before I could even defend myself …. he threw me back. My head hit the pole and my back hit the ground,” which left her with a C7 vertebrae fracture near the base of the neck, along with torn ligaments in both elbows from her violent landing.

The police, who had publicized a photo and video of the suspect earlier this week, said a tip from the public helped them apprehend Allah, who allegedly fled the scene of the crime.

Allah, 54, of Harlem, was arrested Wednesday night and charged with aggravated harassment and assault as a hate crime. He faces up to 15 years in prison if convicted. Prosecutors said his criminal record includes three felony convictions and 23 misdemeanor convictions, but they did not disclose the nature of the charges.