BROOKLYN residents were shocked last week to see vehicles with the words “Muslim Community Patrol” (MCP) emblazoned on them, along with Arabic writing on the outside, cruising the streets of Bay Ridge, which eerily resemble New York Police Department (NYPD) squad cars.

New York Post The white Ford Taurus bears insignia nearly identical to those of an NYPD patrol car — with blue horizontal stripes down the sides, a shield on the front driver’s side door and the words “Muslim Community Patrol” descending on the rear door, where a department vehicle would say “Courtesy Professionalism Respect.”

These Muslim Patrol officers even have official shirts with a pseudo badge on the breast. The car also has words in Arabic on the side. The vehicle was recently spotted cruising along Fifth Avenue in Brooklyn’s Bay Ridge, home to an exploding Muslim population, which has replaced the mainly Italian and Jewish populations of the 20th Century there.

Allegedly, they act as a community neighborhood watch that coordinates with NYPD, just like the Hasidic Shomrin and the Asian Safety patrol, neither of which has cars that look like NYPD cars. The patrol doesn’t have the authority to stop and detain people, but their presence alone could be intimidating to non-Muslims. 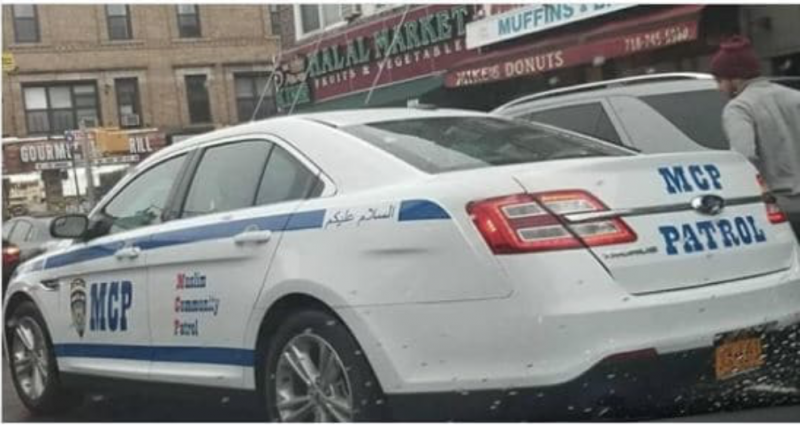 Look at what “Muslim Patrols” (which are illegal) have done in London.

The ‘Muslim Patrol’ sparked huge controversy when it posted a series of videos on YouTube, including one called ‘The Truth About Saturday Night’.

In them they confronted members of the public, demanding they give up alcohol and that women cover themselves in a ‘Muslim area’. The hooded men filmed themselves calling white women ‘naked animals with no self-respect’ and labelled alcohol ‘evil’ as they stole it from revellers.

According to Biz Pac Review: These Muslim patrol cars and the resulting outrage on Twitter against them reflect a belief among some Americans that the Muslim community wants to usurp America’s constitutionally based system of law and replace it with that of Sharia, a religious law derived from the religious precepts of the Islamic religion.

While these fears may sound outlandish, they stem from actual examples of Sharia being practiced in the United States. A perfect example of this occurred in 2010, when a federal judge appointed by former Democrat President Bill Clinton ruled that it was unconstitutional for Oklahoma to bar state courts from considering the application of Sharia law in their rulings.

Another example happened just last year, when a Minnesota Muslim man intent on imposing Sharia law in his local community reportedly began patrolling his neighborhood and confronting anyone who dared to violate Islam’s strict rules and dress codes. At the time local authorities received reports about a mob of Muslim men walking around with uniforms that read “Muslim Defense Force” and “Religious Police.”

Both Muslim Patrols and Sharia Patrols proliferate in Muslim parts of London. Leader of the ‘Sharia Project’ says: “The law of the land can “go to Hell.”

Undeterred by recent arrests of their fellow ‘sharia police,’ Sharia Patrols are back on the streets, verbally harassing and chasing away anyone whom they consider to be violating Islamic law, for example, being openly gay, wearing short skirts, tight pants, drinking beer, eating non-halal hot dogs, etc.

Not only London, a Danish group of Salafists calling themselves ‘Call to Islam’ have introduced round the clock patrols in the Sharia zones of Copenhagen, and eventually, other areas of Denmark. 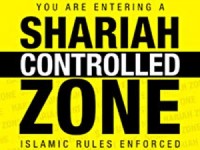 The Danish group seems to have received its inspiration from a movement in Britain in July in which bright yellow posters were put up in some London boroughs saying: “You are entering a Shariah Controlled Zone: Islamic Rules Enforced”. The posters went on to suggest that in the zone, alcohol, gambling, music and concerts, pornography and prostitution, drugs and smoking were all prohibited.