The attackers, in the Bavarian city of Amberg, were comprised of 4 Muslim asylum seekers, aged 17 to 19, from Iran, Syria and Afghanistan. They left 12 people aged 13 to 42 injured after carrying out random attacks and hurling racist abuse at them.

A man who tried to help the victims was also beaten. Jörg Meuthen the speaker for the right-wing Alternative for Germany commented on Facebook: “Nine random victims of these “refugees” had to be treated in hospital. So this is how one “applies” for asylum in Germany now.” 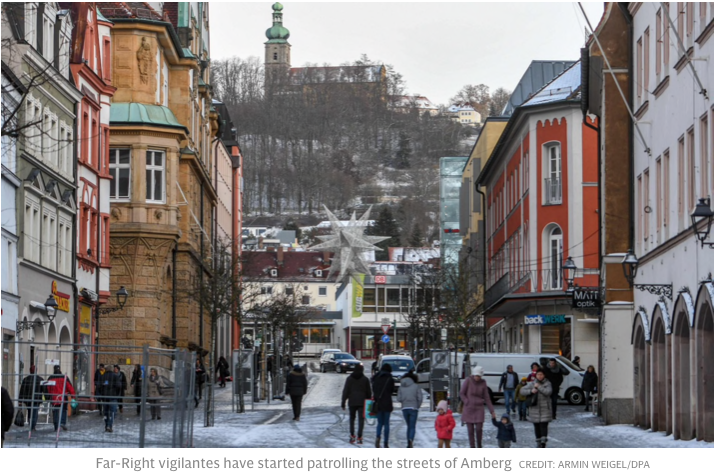 The Muslim thugs attacked a 13-year-old, named as Nimo M, who was kicked in the stomach before a 29-year-old, identified as a landscape gardener named Marco S. was hit in the face. In another incident, a 17-year-old girl was branded a ‘hooker’, Bild reports, before her companions were struck in the face when they tried to intervene.

One eyewitness said a man was pushed down a flight of stairs at the train station. Another teenager described how racist abuse was hurled at a friend before three people in the group were chased and attacked. A man who tried to help them was also beaten up, said the teenager, who needed hospital treatment for bruises and concussion.

The mayor of Amberg, Michael Cerny slandered them a “neo-Nazi” group and was “shocked” that were marching on his streets.  ‘I can understand the insecurity seen in some of the reactions of some Ambergers, but the hatred and the threats of violence from all over the country go way too far,’ Cerny told the local daily Mittelbayerische Zeitun

Police said they were investigating the reports, which also said a group calling itself ‘Kraut/pol’ had accused town authorities in an email of failing to protect the citizens of Amberg.

Merkel did not address this or the many other crimes committed by refugees because of her open border policies, in her New Year’s Eve address and instead called on Germans to be more tolerant.

According to Bavaria’s Interior Minister Joachim Hermann (CSU), there is currently no legal way to expel the men who  attacked and injured passers-by in Amberg. Currently, deportation “is not legally possible in any case,” said Herrmann.

Western media make excuses for the violence and Germans blame themselves.

Yet, Germany saw nothing wrong with self-appointed vigilante sharia patrols: