The Islamic Party of Ontario is a symptom of the cultural suicide masquerading as diversity and multiculturalism imposed upon Canadians and enforced by the political class. Islam does not allow real integration or assimilation with the native population. 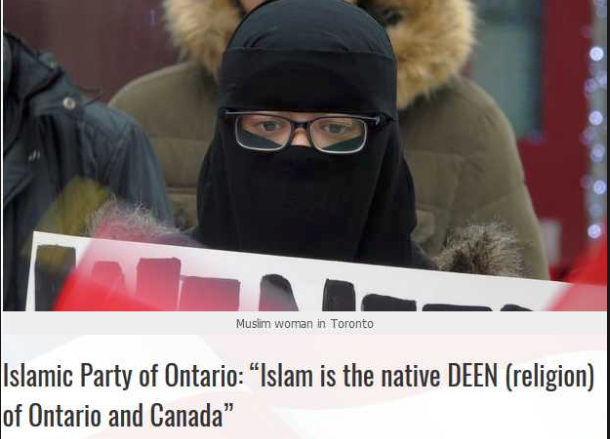 Useful Canadian idiots like Kathleen Wynne happily supported the implementation of Islam’s vile sharia law in Ontario Schools for Muslim votes. Muslims are allowed to perform their unvetted cult rituals on school property during school hours. This is the Canada of  Muslim-pandering Justin Trudeau’s Liberal party.

The newly registered Islamic Party of Ontario claims to desire in Canada, according to their posted principles and policies. Below are a few of their ‘principles.”

• Establish Islam as the native religion of Ontario and Canada.

• Qur’an is the latest and final edition of divine books that provides complete guidance to all mankind in all walks of life that include politics and governance under the belief of Supremacy of Allah.

• The right of all to have food, clothing, and shelter with dignity to all. Interest-free capital and worker partnership economy; neither Capitalism nor Communism.

• The finances of businesses and banks will be managed with labour-capitol partnership and share in profit. A person who has more than his/her needs will be encouraged to give to others to develop private businesses. If a person is not ready to give, then he or she should share (justifiable) in profit and loss but should never lend money on interest. (Sure sounds like Communism to me)

• Obscenity, vulgarity, nudity, homosexuality and perversion must be checked.

• Liquor, drugs, adultery, gambling, etc. should be banned in society.

• The experience and surveys show that “boy only” and “girl only” schools produce much better results. We will support a gradual transition from co-education to gender-specific schools.

• Government funding to all faith-based schools with the freedom of conscience and religion must be granted.

• A strict law will be suggested to punish blasphemy of any religious (all) symbols and personalities.

So would Canadian Muslims like to see Canadian law replaced by sharia?