Banned in France (where it was released as ‘Salfistes’), ‘JIHADISTS’ goes deep into the heart of the most radical and violent of Islamic movements – Salafism – to reveal the inner workings of extreme Islam. 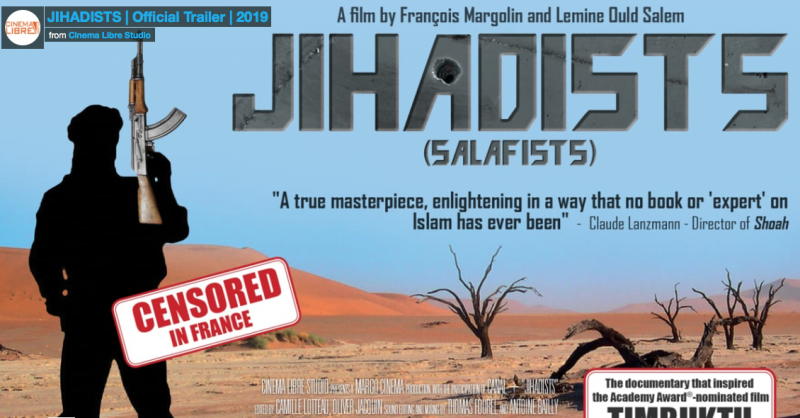 Quilette Some years ago, when assessments of the Arab Spring were at their most optimistic, it became common to hear it suggested that al-Qaeda was, if not defeated entirely, then virtually irrelevant. And yet, with all eyes on the Middle East, towns and cities in Mali would soon be falling like dominoes to al-Qaeda and its Islamist allies.

This was the context in which two French filmmakers, François Margolin and Lemine Ould Salem, boldly journeyed to North Africa to document life in territory now governed by sharia law. The result of that trip is an extraordinary documentary entitled Jihadists, an unprecedented, unflinching, and unsettling glimpse into life under Islamofascist control.

Hatred is the film’s stubbornly recurring theme, repeated like a mantra and directed at a plethora of targets. Hatred of Jews; hatred of women; hatred of homosexuals; hatred of the West and all its works, and in particular its foreign policy.

In the ongoing debate over terrorism, Jihadists offers a timely reminder of why Islamic theology matters, and a sharp rejoinder to those academics and analysts determined to downplay its importance as the primary driver behind terrorism and extremism and overplay every other possible driver (economics, racism, historical and geopolitical grievance, and so on). It is unfortunate, to put it mildly, that in 2019 we still find ourselves subjected to denialist headlines such as this dismaying recent example in the Observer: “Brain Scans Show Social Exclusion Creates Jihadists, Say Researchers.” 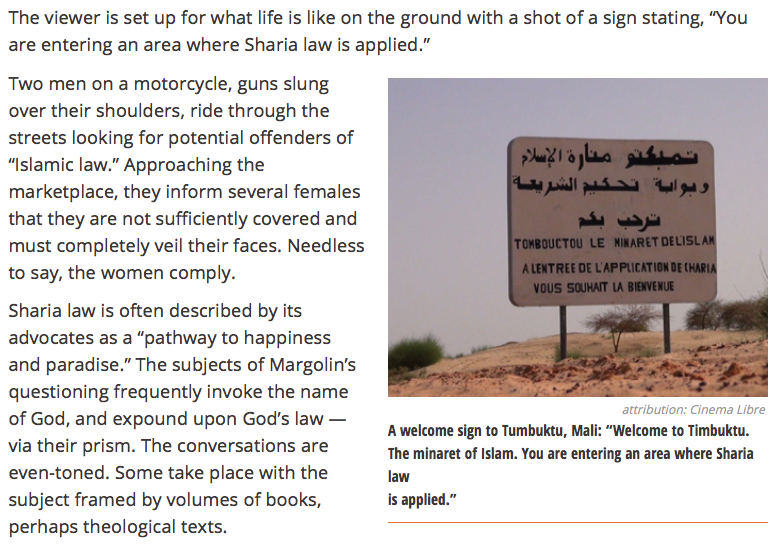 Throughout the film, religious fervour and a craving for power are entangled in the interviewees’ sadism, and this seeps out of the scenes of ISIS’s drive-by executions, of gunmen shooting cowering prisoners in the back of the head, and of hands being hacked off while an audience of goons ecstatically yell “Allahu Akbar!” And, predictably, the air is heavy with the stench of paranoid anti-Semitism. Amedy Coulibaly’s attack on a Jewish supermarket in Paris in January 2015 is justifiable, announces Salem, because “between Jews and Muslims it is an endless fight. We are at war.”

The filmmakers were granted unparalleled access to fundamentalist clerics of Sunni Islam who proselytize for a “purer” form of Islam–including jihad of the sword–in Mali, Tunisia, Iraq and Afghanistan. Their theoretical interpretations are juxtaposed against images and footage from recruitment videos to show the hardline application of sharia law. Without experts contextualizing these events, the film, which inspired the Oscar-nominated feature, “Timbuktu”, paints a stark portrait of everyday life under jihadi rule.

And that is why Jihadists deserves and needs to be seen. By letting the Islamic extremists speak for themselves, Margolin and Salem’s film enhances our understanding of why acts of terror keep occurring. It is effective precisely because no attempt is made to mediate or dilute the message with superfluous context, or experts explaining why the jihadists are wrong or cannot possibly mean what they say. Margolin and Salem’s film demonstrates quite plainly that they do mean it. They do believe it. And it is time that we believed them.