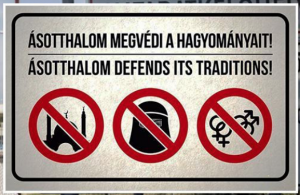 The European Union’s sinister plan for ‘population replacement’ – importing millions of Muslim immigrants to replace a declining Christian population – will NOT be forced on Hungary, Poland, Czech Republic, Slovakia or Italy. In fact not only is Hungary offering tax-free income benefits, and more, for 4-child families, it is opening its doors to Western Europeans who are fleeing their countries which have become meccas for Muslim migrants.