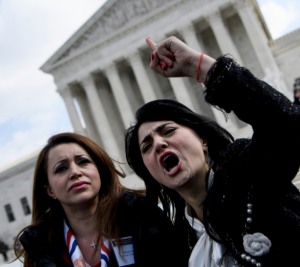 Shouting their outrage at CAIR for defending Ilhan Omar’s blatant antisemitism, the women condemn the ongoing hatred for Jews by Muslims, while demanding that CAIR stop lying to Americans and covering up the rampant persecution and genocide of Christians around the Muslim world, of which they have had first-hand experience.

They call out Women’s March co-founder Linda Sarsour for supporting sharia law that empowers Muslims to oppress women, who have no rights and are subjected to honor killings and abuse. They scream that under sharia law, young Muslim girls are genitally mutilated  and forced into child marriage and sex slavery.

Despite being pushed back by security, the women refuse to be silenced. When the camera finally goes back to one of the CAIR speakers, the first thing out of his lying mouth is that “None of us Muslims hate Jews.”