A man dressed in black opened fire inside a Muslim house of worship, Masjid Al Noor in Christchurch, before apparently escaping. Witnesses report dozens of rounds were fired and there appear to be several dead. 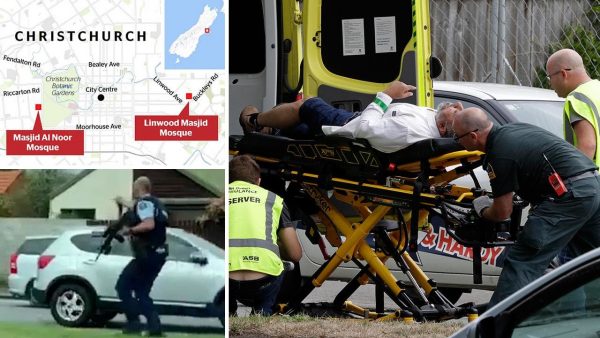 Times of Israel Witness Len Peneha said he saw a man dressed in black enter the Masjid Al Noor mosque and then heard dozens of shots, followed by people running from the mosque in terror. He said he also saw the gunman flee before emergency services arrived. Peneha said he went into the mosque to try and help: “I saw dead people everywhere.”

(Funny, I was just thinking the other day that I rarely see stories about New Zealand having Muslim problems as they do in neighboring Australia. Guess I was wrong.)

BREAKING! There appears to have also been a second mosque shooting in Christchurch.

New Zealand media say a shooting has occurred in a second mosque in the same city of Christchurch. No details were immediately available.

CNN is reporting that “One person is in custody, however, police believe there may be other offenders,” the police said on Twitter. There are reports the mosque shooting may have been broadcast live on social media while it was taking place.

Police told CNN they are “aware” of the video but were unable to confirm or deny its veracity. The disturbing video which has not been verified by CNN, purportedly shows a gunman walking into the mosque and opening fire.

Australian white supremacist terrorist, 28, kills 49 and injures 20 more when he opens fire in a Christchurch mosque and livestreams the slaughter – as cars loaded with bombs are found and four suspects are arrested. 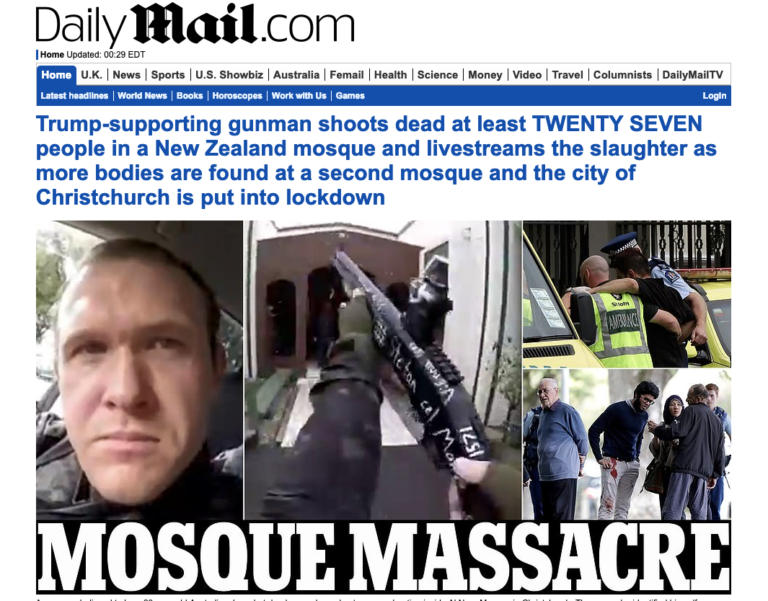 The gunman – who identified himself on Twitter as Brenton Tarrant from Grafton, New South Wales – live-streamed the mass shooting inside the Al Noor Mosque, which happened about 1.30pm (11.30am AEDT) as Friday prayers were underway.

A video seen by Daily Mail Australia shows the man firing multiple shots at dozens of people as they try to flee.

Four people are in custody, including three men and one woman. New Zealand Prime Minister Jacinda Ardern said they were not on terror watch lists. One of them was arrested while wearing a suicide vest, while a man wearing military fatigues was arrested outside Papanui High School. 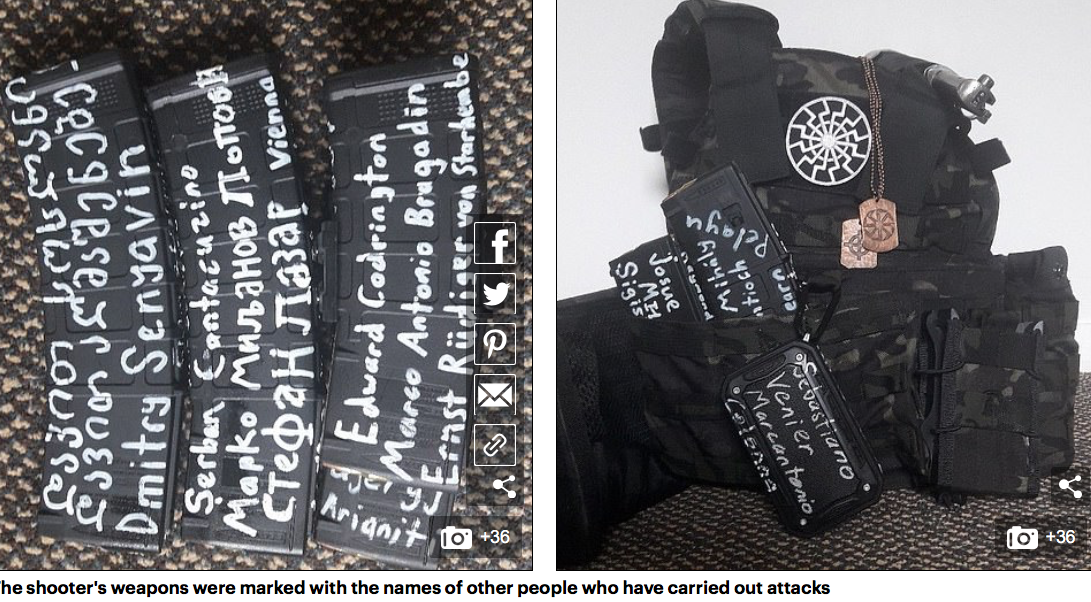 The suspected gunman posted a 87-page manifesto to Twitter before the killings, foreshadowing a ‘terrorist attack’.

A total of 30 people were killed at the Al Noor Mosque. 10 others died at the Linwood Avenue mosque, three of which were outside the mosque itself. A further 20 people were reported as seriously injured at the Christchurch Hospital emergency room.

There was another shooting outside Christchurch Hospital and multiple bombs were attached to cars three near the mosque. 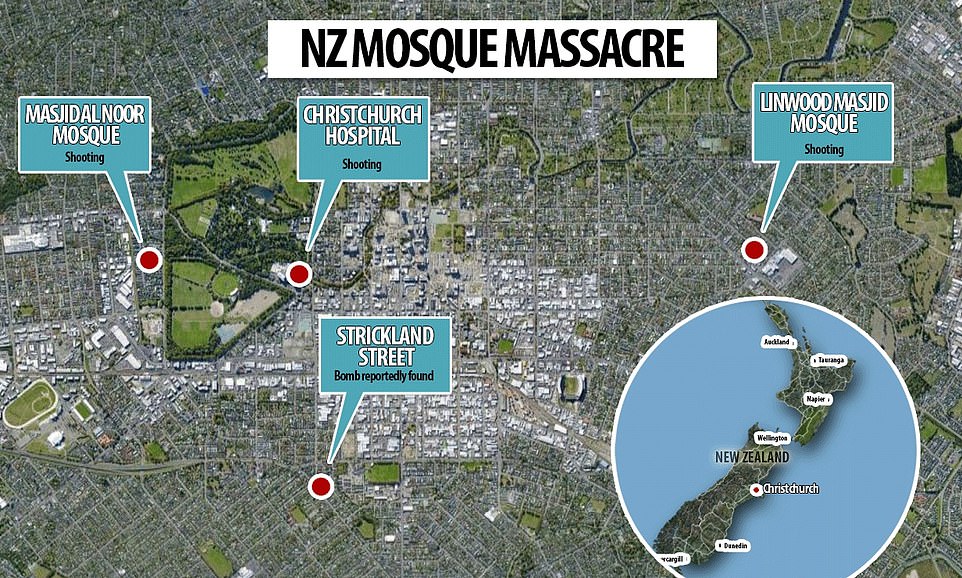 Sputnik News The viewers of the stream could watch as he armed himself, walked into the mosque and started shooting indiscriminately. He stood in the doorway, blocking people inside from escaping, Herald reports.

After shooting all the ammunition he had on himself, Tarrant walked out to his car to get some more bullets from the boot. Then, he went back to the mosque looking for survivors and shooting people lying on the ground motionless. As Tarrant left the mosque, he shot a woman on the street.

The video then shows the shooter sitting back into the car and driving away. One vehicle that nearly pulled into his path was fired at several times with a shotgun. The 17-minute video ends with the shooter driving away at full speed. The stream has not been interrupted for the entirety of the shooting.

Prior to the shooting, the man uploaded a lengthy 73-pages manifesto explaining in details why he commited his atrocity.

Tarrant declared that he wishes he’d “killed more invaders and traitors” in the racist document titled The Great Replacement.

The SUN When writing why he carried out the massacre, the shooter said: “To most of all show the invaders that our lands will never be their lands, our homelands are our own and that, as long as a white man still lives, they will NEVER conquer our lands and they will never replace our people.

“To take revenge on the invaders for the hundreds of thousands of deaths caused by foreign invaders in European lands throughout history.” “By the definition, then yes. It is a terrorist attack. But I believe it is a partisan action against an occupying force.”

He boasted that he chose to use firearms so he could influence politics in the US.

He wrote: “Finally, to create conflict between the two ideologies within the United States on the ownership of firearms in order to further the social, cultural, political and racial divide within the United states.

“This conflict over the 2nd amendment and the attempted removal of firearms rights will ultimately result in a civil war that will eventually balkanize the US along political, cultural and, most importantly, racial lines.”

The suspected shooter described himself as an “ordinary white man born in Australia to a working class, low income family who decided to take a stand to ensure a future for my people.”

Some excerpts from his manifesto: 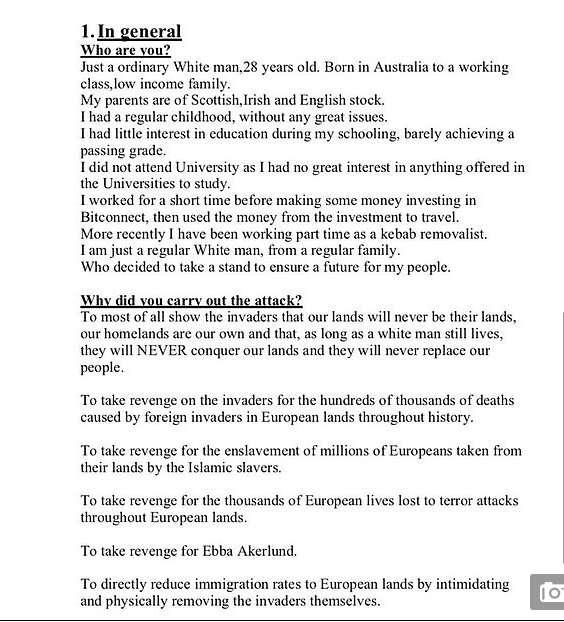 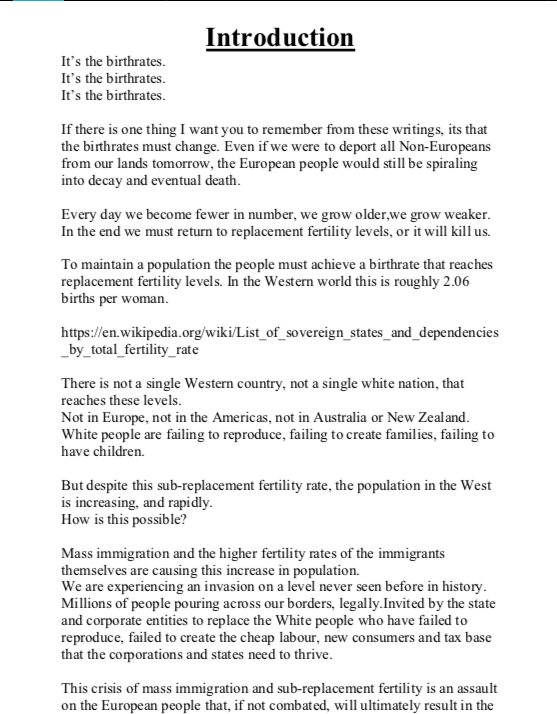 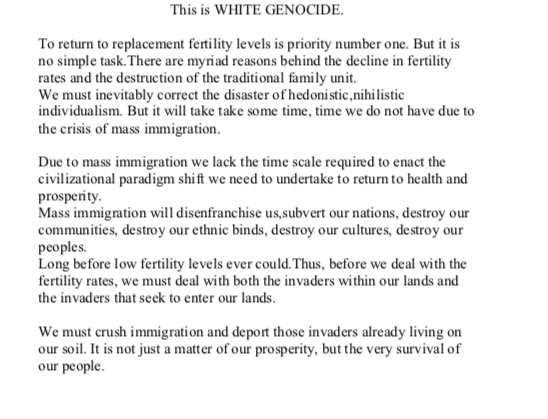 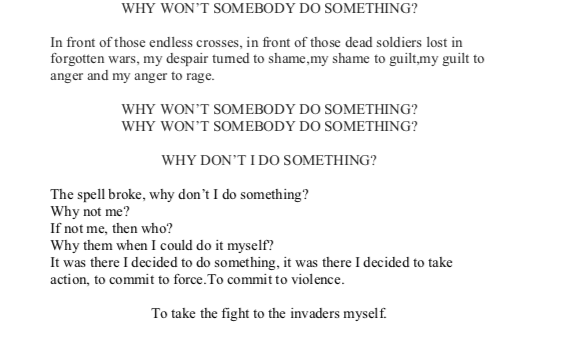 The manifesto in full

Some of the livestream video:

Graphic aftermath of the shooting:

Shooter inside the mosque:

Gunman at New Zealand mosque live-streamed the massacre, I suppose. Viewer discretion: graphic, do not play if you are under 18 or psychologically unprepared. pic.twitter.com/KkvbgZ3mSm 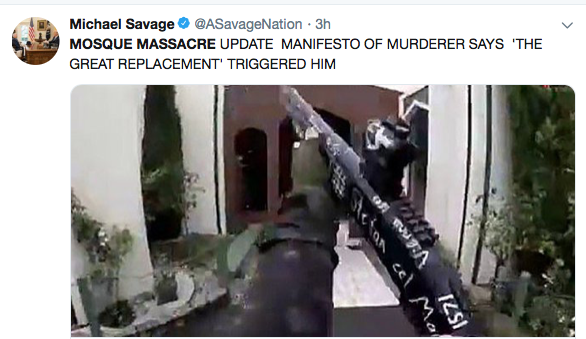 Now they are blaming Candace Owens, a conservative American black woman who fears Islam as much as the rest of us: 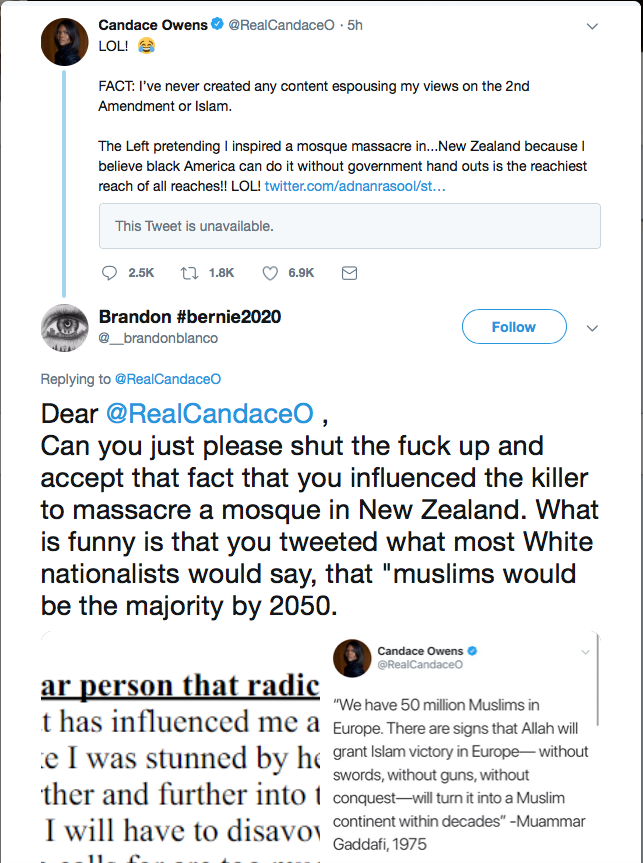 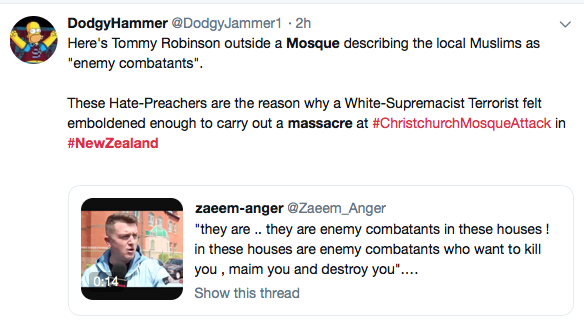