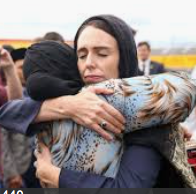 Notice how the TV commentators get all warm and wet in their gushing praise of the hijab-wearing, Muslim-pandering, Christian prime minister who keeps slobbering about the recent mosque attack, while at the same time, demanding that law-abiding citizens turn in their guns.