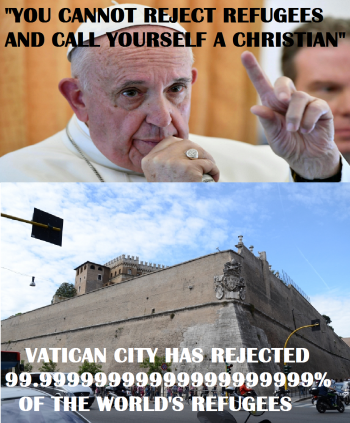 Most recently, when asked last Sunday “a question about migration in general and about U.S. President Donald Trump’s threat to shut down the southern border with Mexico,” the pope pontificated in platitudes: “Builders of walls,” he said, “be they made of razor wire or bricks, will end up becoming prisoners of the walls they build….  With fear, we will not move forward, with walls, we will remain closed within these walls.”

PJ Media Less than a week earlier, Pope Francis lectured the mayor of Rome about the need to be more welcoming to Muslim migrants. “Rome,” he declared, “a hospitable city, is called to face this epochal challenge [Muslim migrants demanding entry] in the wake of its noble history; to use its energies to welcome and integrate, to transform tensions and problems into opportunities for meeting and growth.” 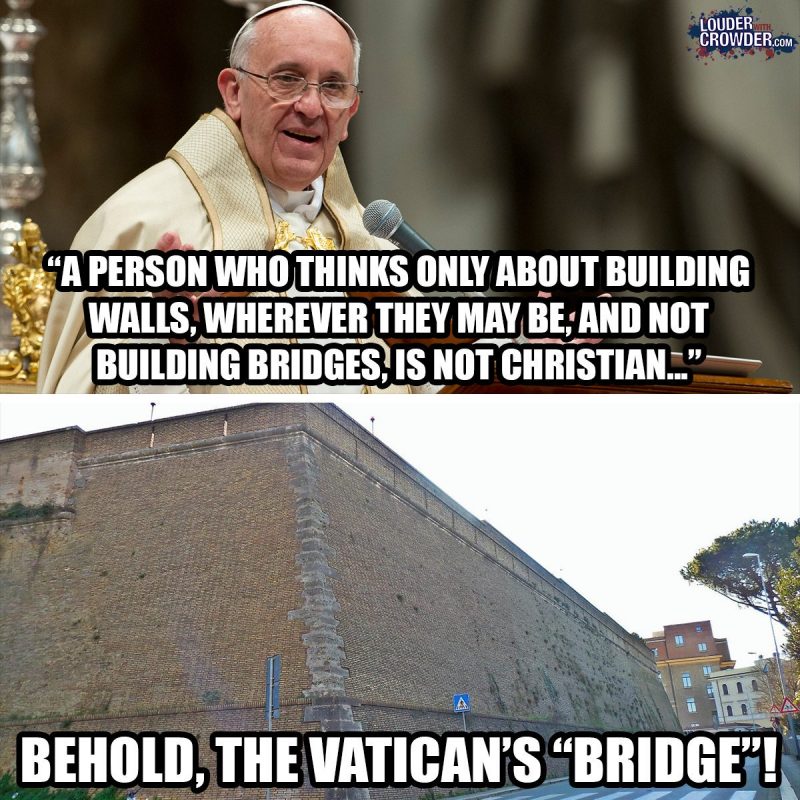 The grand irony of all this is that Pope Francis lives in the only state to be surrounded by walls—Vatican City—and most of these bastions were erected to ward off centuries of Islamic invasions.

Most notably, in 846, a Muslim fleet from North Africa consisting of 73 ships and 11,000 Muslims, landed in Ostia near Rome.  Muslim merchants who frequently visited Italy had provided them with precise intelligence that made the raid a success.

Although they were unable to breach the preexisting walls of the Eternal City, they sacked and despoiled the surrounding countryside, including—to the consternation of Christendom—the venerated and centuries-old basilicas of St. Peter and St. Paul.  The Muslim invaders desecrated the tombs of the revered apostles and stripped them of all their treasures. 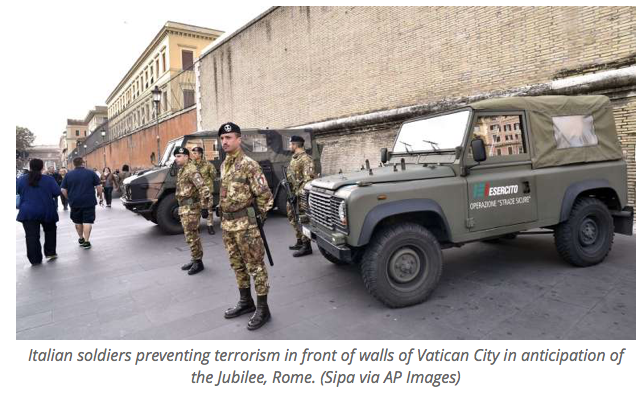 Pope Leo IV (847-855) responded by building many more walls, including fifteen bastions along the right bank of the Tiber River, the mouth of which was forthwith closed with a chain to protect the sacred sites from further Muslim raids and desecrations.  Completed by 852, the walls were in places 40 feet high and 12 feet thick.

Further anticipating the crusades against Islam by over two centuries—and thus showing how they were a long time coming—Pope Leo (and after him Pope John VIII) offered the remission of sins for those Christians who died fighting Islamic invaders.

Such was the existential and ongoing danger Muslims, referred to in contemporary sources as “Sons of Satan,” caused for Europe—more than two centuries before the First Crusade was launched in 1095. 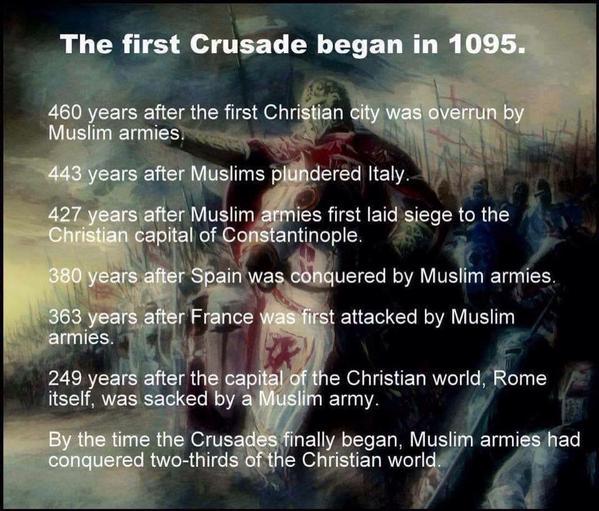 Indeed, just three years after the initial Muslim invasion of Rome, “in 849 the Muslims attempted a new landing at Ostia; then, every year from around 857 on, they threatened the Roman seaboard,” explains French medieval historian C. E. Dufourcq:

In order to get rid of them, Pope John VIII  decided in 878 to promise them an annual payment [or jizya] of several thousand gold pieces; but this tribute of the Holy See to Islam seems to have been paid for only two years; and from time to time until the beginning of the tenth century, the Muslims reappeared at the mouth of the Tiber or along the coast nearby. 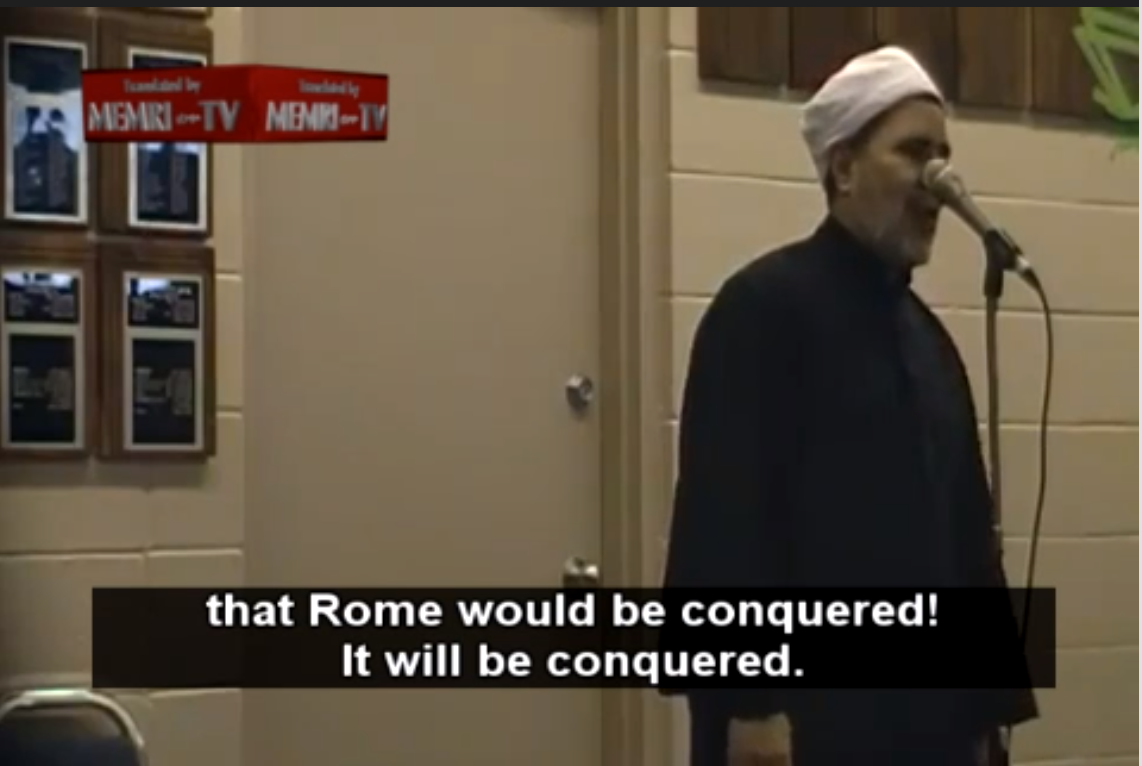 Today, many Muslims, not just of the ISIS-variety, continue to boast that Islam will conquer Rome, the only of five apostolic sees never to have been subjugated by jihad (unlike Antioch, Alexandria, Jerusalem, and Constantinople).

Similarly, Muslims all throughout Europe continue exhibiting the same hostility and contempt for all things and persons non-Islamic, whether by vandalizing churchesand breaking crosses, or by raping “infidel” women as theirs by right.  As for Italy, click here, here, and/or here for an idea of how Muslim migrants behave.

And that is the point Pope Francis misses: walls should only go down and bridges should only be extended when both parties are willing to live in amicable peace—as opposed to making the destructive work of those who have been trying to subjugate Europe in the name of Islam that much easier.

Note: For more on how walls saved Western civilization against Islam, see Ibrahim’s recent book, Sword and Scimitar: Fourteen Centuries of War between Islam and the West.