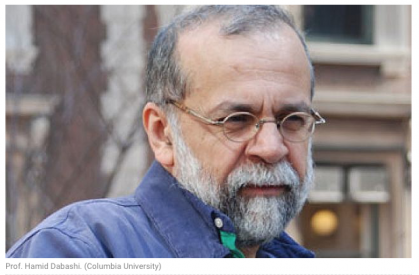 A pro-Israel student group at Columbia University has called on the university’s leadership to denounce a Facebook post by an Iranian-born Muslim professor of Iranian Studies and Comparative Literature, Hamid Dabashi, in which he compared the Jewish state to the Islamic State (ISIS). He has also called Israel a “key actor” in “every dirty treacherous ugly and pernicious act happening in the world.”

Hamid Dabashi has spread anti-Semitic conspiracy theories and equated Israeli policies with ISIS and Nazi Germany. He has also expressed support for violent anti-Israel protests and demonized Israel on social media. (Imagine the outrage if a Jewish professor at Columbia University were spreading the same kind of virulent hatred for Muslims in his classroom and on social media) 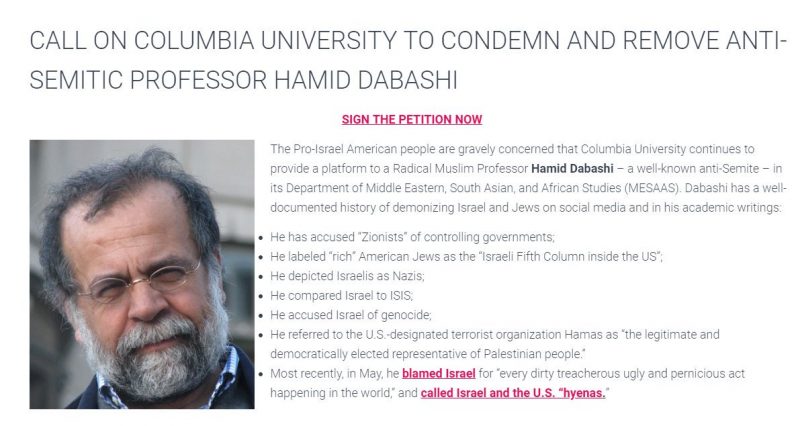 Dabashi then answered his own question: “ISIS does not have a platoon of clean shaven and well coiffured [sic] columnists at the New York Times propagating the cause of the terrorist outfit as the Zionists columnists do on a regular basis. 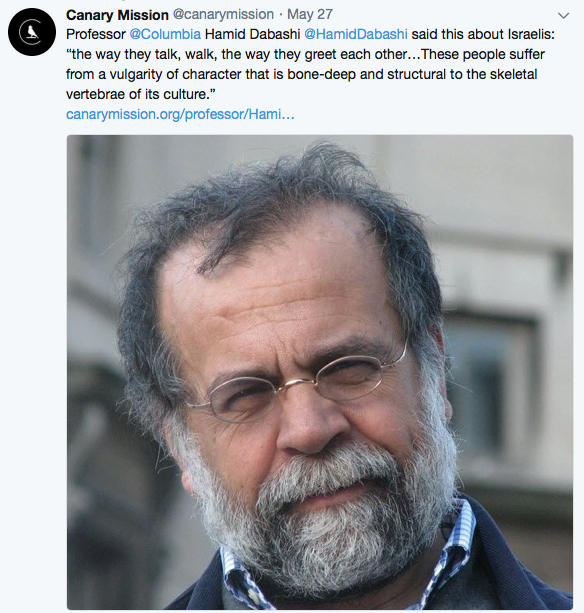 “All of Syria belong to all Syrian people,” Dabashi concluded, ” not an inch it either to ISIS or to ISRAEL”. (The only reason Israel has part of Syria is because of an unprovoked military attack against the Jewish State by Syria. The Golan Heights remains part of Israel as a buffer against further attacks by Syria)

Dabashi has a history of inflammatory comments about Israel and the Jewish people. Last May, after President Trump announced the U.S. was pulling out of the Iran nuclear deal, Dabashi posted a tweet blaming Israel for “every dirty treacherous ugly and pernicious act happening in the world.” Just wait for a few days and the ugly name of ‘Israel’ will pop up as a key actor in the atrocities…” 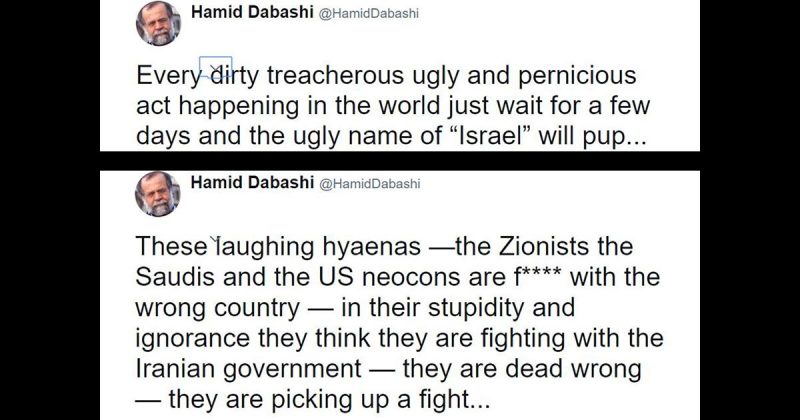 The professor also attacked Israeli Prime Minister Benjamin Netanyahu in another now-deleted Facebook post as “this ridiculous man, this notorious, corrupt, criminally insane creature, this laughing stock of every decent civilized human being on planet earth, this pathetic pathological liar, this vulgar vicious charlatan,” he wrote, “this settler colonialist racist thug, this war criminal, this leading perpetrator of crimes against humanity, this nightmare who needs to be put in a [straitjacket] and chained to a cage in an asylum house or a zoo …”

Last month, Dabashi wrote in an opinion piece for Al Jazeera that “Jews are the victims, Zionists the beneficiaries of anti-Semitism. … The conflation of Zionism and Judaism … is a false flag to confuse the issue and prevent the active solidarity of these two main victims of their racism.”

In response, Jonathan Greenblatt, the CEO and national director of the Anti-Defamation League (ADL), wrote that Dabashi “employs all the sleights of hands by those on the political left who engage in anti-Semitic tropes against Jews. …

Canary Mission “Blaming the Jewish state for every problem in the world is virulent anti-Semitism, echoing rhetoric that has led to oppression and violence against Jews for centuries,” Rena Nasar, a StandWithUs campus director, told Campus Reform. “Unfortunately, this is unsurprising coming from a professor with a long history of racism against Jews and Israelis. Columbia University should unequivocally condemn this hate coming from one of its faculty members.”

Hamid Dabashi has spread conspiracy theories about Jewish influence in the U.S. and equated Israeli policies with Nazi Germany and ISIS.

On November 12, 2017, Dabashi posted a picture on his Facebook account of Jared Kushner and Ivanka Trump with the Crown Prince of Saudi Arabia Mohammed bin Salman.

Along with the photo, Dabashi wrote “There is a reason why a small gang of European Zionists could land in Palestine and in broad daylight of history steel it from under the feet of Palestinians… and today that reason is in the shape of this contemptible coward Mohammed bin Salman — Like a rich brat teenager that [bin Salman] is he hides behind the wing of his Israeli and American protectors and benefactors, buys them with his windblown wealth, so that Jared Kushner’s Zionist kins can kill and rob Palestinians even more as they enable him to slaughter Yemeni women and children apace.”

On November 12, 2015, Dabashi posted on Facebook that “Hillary Clinton has white house ambition the first thing she does is pledge to her Zionist bosses…”

On June 23, 2016, Dabashi proposed on Facebook his “simple solution,” that Presidential Candidate Hillary Clinton “pick up Benjamin Netanyahu as her VP and get it over with.”

In a July 2008 editorial, Dabashi referred to a “Zionist cabal,” writing that “[U.S. President] Obama began his speech in front of AIPAC by falling right into the oldest trap that the American Zionist cabal has in its bag of tricks — dispatching its lunatic fringe to spread rumours (via emails) of facts and fantasies…”

Dabashi then slammed President Obama’s momentary recognition of Jerusalem as Israel’s capital as giving Jerusalem to a “band of white European colonial settlers and the pack of their billionaire American supporters.”

Dabash also referred to Israel as a “racist apartheid state” and “a colonial outpost of American military barbarism.”

In a December 2009 article, Dabashi claimed that “the pro-Israeli Zionist lobby in the US banked and invested heavily in infiltrating, buying, and paying for all the major and minor corridors of power.”

On August 8, 2014, Dabashi compared Gaza to Auschwitz, and asked “What are Israelis? Who are Israelis? They are Israelis by virtue of what? By a shared and sustained murderous history – from Deir Yassin in 1948 to Gaza in 2014. Is that not Zionism, the ideological foundation stone of being an Israeli?”

In a July 19, 2014 Facebook post, Dabashi juxtaposed a picture of the Warsaw Ghetto with a picture in Gaza and wrote: “Warsaw Ghetto 1943 (the site of Jewish uprising against Nazi barbarism)–Gaza 2014 (the site of Palestinian resistance against Zionist militarism)”

In a December 2009 article, Dabashi promoted BDS and also stated that Israel had lost any “moral” claim to the Holocaust, referred to Israelis as a “militant band of European colonizers” and accused Israel of “ethnic cleansing.”

In a September 2002 interview with the anti-Israel Electronic Intifada website, Dabashi referred to pro-Israel advocates as “Gestapo apparatchiks” and said that “The so-called ‘pro-Israeli lobby’ is “an integral component of the imperial designs of the Bush administration for savage and predatory globalization…”

On September 16, 2015, Dabashi wrote on Facebook that “Israel is the most well funded terrorist organization on planet earth over the last sixty years plus –the Islamic State looks up to the Jewish State as its exemplary model.”

In a March 2015 article, Dabashi wrote that “the majority of Israelis… are delusional fanatics who have worked themselves into a frenzied stupour [sic.] to murder more Palestinians, steal more of Palestine, wage war against Lebanon, Syria or Iran, and do whatever other murderous mischief is necessary to convince them from within that self-propelling hurricane of death and destruction that they are right and the whole world is wrong.”

Dabashi has also accused Israel of committing an “incremental genocide“ of the Palestinian people, and has described Israel as “a military garrison that has stolen another people’s homeland at gunpoint and forced them into exile and refugee camps. Like the rest of Palestine, Jerusalem belongs to Palestinians”.

In July 2015, Dabashi posted on Facebook that “There must be a global uproar against the thuggish vulgarity of Netanyahu and his Zionist gangsters in Israel and the US Congress to force them to dismantle their nuclear program–systematically used to terrorize and murder Palestinian people and steal the rest of Palestine!”

On August 21, 2014, Dabashi posted on Facebook that Operation Protective Edge (OPE) was “the continuation of the selfsame logic of Zionist conquest and depopulation of the entirety of Palestine.”

Israel implemented OPE to destroy Hamas attack tunnels and stop rocket attacks from Gaza targeting Israeli civilians — that increased dramatically in the weeks prior to the Operation.

In a 2012 article, Dabashi claimed that Israel attacked Gaza in Operation Pillar of Defense (OPD) to gain political standing (rather than to stop the Hamas rocket attacks fired at civilian population centers) and is “interested in nothing but maiming and murdering more Palestinians.”

In March of 2016, Dabashi signed a petition, created by a student initiative, to rebrand BDS at Columbia as: Columbia University Apartheid Divest (CUAD).